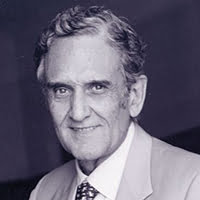 Dr Pedro Schwartz is Rafael del Pino Professor in the Department of Economics at Camilo José Cela University in Madrid. At the MPS General Meeting in Hong Kong in September 2014 he was elected President of the Mont Pèlerin Society, of which he became a member in 1978. He is a Bachelor and Doctor in Laws of the Universidad Complutense de Madrid, and a Master of Economics and a PhD in Political Thought at the LSE. Since 1970 he has been a Professor of Economics at four Spanish universities. From 1982 to 1986 he was a member of the Spanish Parliament in the Liberal / Conservative interest. From 2006 to 2008 he was an expert writing briefs for the Committee on Economic and Monetary Affairs of the European Parliament.

He belongs to the Board of the Spanish Think Tank “Civismo”, to the Academic Advisory Board of the IEA in London, of the Liberales Institut Zürich and of the European Center of Austrian Economics at Liechtenstein; and in the US, he is an Adjunct Scholar of the Cato Institute.

In September 1990, HM Queen Elizabeth II made him an Honorary Officer of the British Empire. In February 2003, he was awarded the Rey Jaime I Prize for contributions to economics in Spain. In February 2005 he became a member of the Royal Academy of Moral and Political Sciences of Spain. In November 2010 HM the former King of Spain handed him the Rey Juan Carlos Prize for Economics. The City of Madrid awarded him the 2008 Jose Ortega y Gasset Prize for his book En busca de Montesquieu.

Every month he publishes a featured column at the Liberty Fund Econlib site. He also writes a weekly column in Expansión of Madrid and every Monday features on Capital Radio in Spain. He often speaks on the Spanish financial and corporate scene for the BBC. He is a frequent lecturer on political economy.

His latest papers in English are: at the IEA, “Happiness not within the Government’s remit” in The Pursuit of Happiness and “Market solutions for the orderly suspension of a euro member” in The Euro – the Beginning, the Middle … and the End?; and in the Cato Journal: “Why the Euro failed and why it will survive” and “The welfare state as an underlying cause of the Spanish Crisis”. He is now writing a book titled When Freedom Dies. The Contradictions of liberal democracy.

Professor Pedro Schwartz is a visiting lecturer in Economics at Buckingham. You can contact him on pedro.schwartz@buckingham.ac.uk.