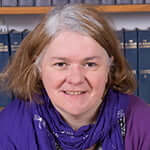 Sheena originally joined the Law School in 1989.  She left as a Senior Lecturer  in 2005 for a career break. She returned in 2011. Her main teaching and research interests lie in Public Law, but she has also taught and researched in areas of Gender and the Law. She also teaches Contract.


She edited the Denning Law Journal from 1996-2005 and was honoured to be able to organise the Denning Symposium at Buckingham in 1999 to mark Lord Denning’s 100th birthday.

“The reviewability of the Parliamentary Commissioner”, Denning Law Journal (1994), 117