The ground-breaking discovery of a Stone Age “eco” home – the oldest sign of settlement yet found  in the Stonehenge landscape – could be under threat if controversial Government-backed plans for a tunnel go through the ancient site.

A planned 1.8 mile (2.9km) tunnel would run within 20 metres of the unparalleled archaeological find, and possibly obliterate other hidden secrets of our Stone Age forefathers, as yet unearthed.

The crucial find was made at an archaeological dig last week, run by the University of Buckingham’s Archaeology Project Director David Jacques, and means that early British history could be rewritten because up to now it’s been assumed Mesolithic families lived a purely nomadic existence. 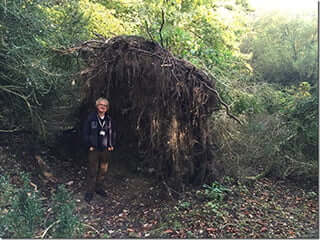 The discovery has been dubbed an “eco” house and is like nothing archaeologists have unearthed from Stonehenge before. Our green ancestors used the giant base – around 9 metres – of a large tree which had fallen to make into the wall of their house. The earthy wooden wall had been lined with flints and the huge, roughly 3 metre pit left by the tree being unearthed had been lined with cobbles by the resourceful people, using stones flung up by the roots of the tree when it was felled. It then appears to have been roofed with animal skin and had a stone hearth close by.  Other indications that our precursors were eco-friendly long before we ever imagined are the presence of a number of large stones placed near the building’s wall which may have been primitive “storage heaters” – warmed by a fire and placed close to where people slept instead of keeping a fire burning all night. 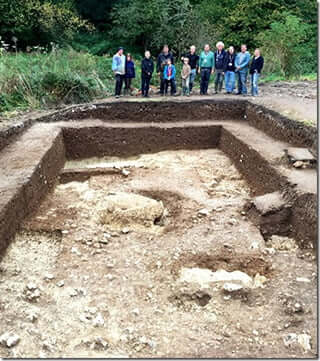 The pit lined with cobbles

David Jacques, who has been running digs at the site for a decade, said: “This is a key site for where Britain began. It is the only continuously occupied Mesolithic site in Western Europe and we believe the “eco” home is the sort of place the first Brits lived in. Something at Blick Mead kept attracting generations back to the site, the cradle of Stonehenge. These people are adapting to nature in a really sophisticated and intuitive way, in contrast to our Government in the 21st century who are expecting nature and our history to adapt to our needs to build a tunnel through this precious countryside.”