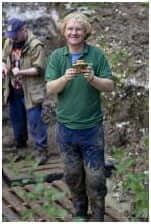 David Jacques was educated at Middlesex University and Wolfson College, Cambridge. His field of research explores the use of the Stonehenge landscape in the Mesolithic period (8500BC-4000BC). Since 2005 he has been the Project Director of an internationally significant Mesolithic archaeological site, one mile from Stonehenge. His team has discovered the oldest settlement in the Stonehenge area, the longest continually occupied site in the United Kingdom, as well as the communities which built the first monuments at Stonehenge. These discoveries have contributed significantly to a new understanding of the initial settlement patterns and practices in the Stonehenge landscape, and to a broader understanding of the sense of place, ritual and memory such hunter-gatherer societies had more generally. In 2013 he was elected a Fellow of the Society of the Antiquaries (FSA) in recognition of the importance of these discoveries.

David Jacques has published in the Prehistoric Society’s PAST Journal, Current Archaeology Magazine, and via the Open University. In 2012, his project at Stonehenge was nominated ‘Research Project of the Year 2013’ by Current Archaeology Magazine, and was runner-up to Leicester University’s discovery of Richard III. Under David Jacques’s direction, the team’s work has also featured on BBC 4’s ‘Flying Archaeologist’ series, regional BBC and ITV output, and has been extensively reported in the press.

As a Fulbright alumnus, David Jacques has worked extensively to improve the education system of the Republic of Georgia, setting up and running a charity which stimulated an investment of $12 million into the Georgian education system between 2005-08. In 2011, he was chosen as one of two ‘Outstanding’ British Fulbright Teacher Program alumni of the past 60 years.