Before the team’s work there was no evidence for the Camp and its surrounds playing a significant part in the Salisbury Plain ritual landscape in any period. Though the team’s budget has been tiny, between £700 and £3,000 a year for work on site between 2005-2012 (though thanks to the University of Buckingham this will be substantially increased this year and for the next two years), the research and team effort has produced spectacular results which have led an English Heritage team to describe Vespasian’s Camp recently as potentially “one of the pivotal places in the history of the Stonehenge landscape”. The contributions of a large number of Amesbury residents have been crucial to the success of the project. There has been a wonderful and rare synergy between the University, the town of Amesbury, and colleagues from other places. As a result we have started to reveal a much more significant story of Vespasian’s Camp’s place in the landscape, and a special place at Blick Mead, which may have been the focus for ritual and veneration for around nine millennia, and could provide the transformative narrative between the hitherto missing Mesolithic context to Stonehenge and Stonehenge itself. Is this the cradle to Stonehenge; the reason why it is where it is? 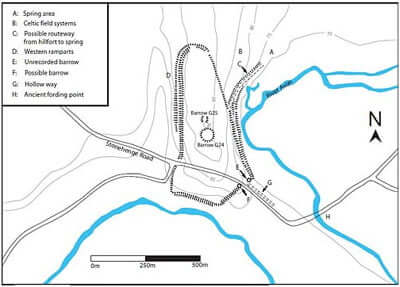 The map of our work on the site 2005-2012: Vespasian’s Camp and environs, showing features discussed in text (contours in metres)

We would especially like to thank Sir Edward and Lady Antrobus so much for allowing us to work on their private property, which is such a magical place. As well as the University of Buckingham, and its Humanities Research Institute, we would also like to thank all the Amesbury residents who helped to find such an exciting new story about their town, and Amesbury Town Council and the QinetiQ Boscombe Down group, both of which deserve the utmost credit for supporting our work and linking it with the needs of their town.  Without all these people and institutions a really important part of Amesbury’s and Stonehenge’s history wouldn’t have been found and there would be no “Brown Badge for Amesbury’s Historic Status”, as awarded in 2011, or new museum, for which land was bought in 2012. 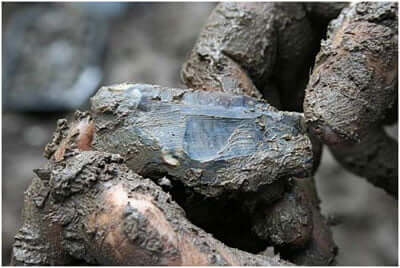 A Mesolithic blade tool just as it came out of the ground – note how sharp the edge still is! 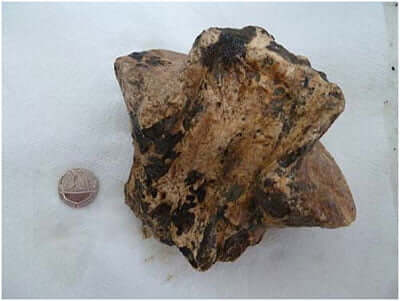 As well as the support from the University of Buckingham, Amesbury Town Council and the QinetiQ group, this project has also been very fortunate to have received much-needed financial support from the following people and organisations: Open University, Wiltshire Unitary Authority, English Heritage, John and Kerry Holmes, John and Sarah Gibbens, the Levick family, Sally Baker, Eve, Beth and the Westmoreland family. These contributions have really helped to keep the project afloat and successful. The contributions of Fred Westmoreland, Andy Rhind Tutt and all at Amesbury Museum have been seminal.

Above all, the project has existed because of the personal interest and “ways of seeing” of the Site Custodian Mike Clarke. Mike works and thinks in the woods every day and has allowed the team to enter this special world. He is greatly respected by us all for his knowledge of Vespasian’s Camp and his approach to life. 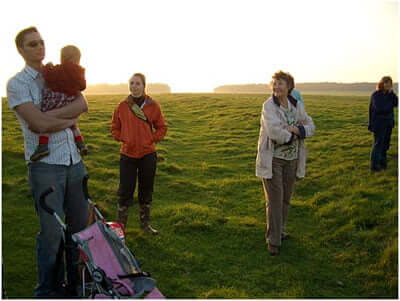 Amesbury residents walking along the Cursus after a day of digging