Publication of the week: Topham Beauclerk 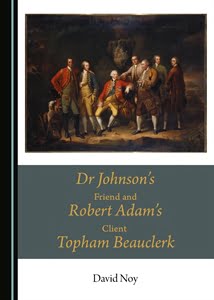 Dr Johnson said that he would walk to the ends of the earth to save Topham Beauclerk. Other people who claimed to be his friends rejoiced at his early death. How did the beautiful youth of Francis Coates’ 1756 portrait become a man whose greatest claim to fame was causing an infestation of lice at Blenheim Palace through lack of personal hygiene? A great-grandson of Charles II and Nell Gwyn, he lived a privileged life thanks to fortuitously inherited wealth. He employed Robert Adam to build him a house at Muswell Hill which has almost completely disappeared from the records of Adam’s work due to a dispute about the bill. He was one of the leading book-collectors of the time, with a library of 30,000 volumes whose sale after his death was a major literary event. He also used his wealth to indulge interests in science and astronomy and a passion for gambling. As a result, he ran through his inheritance as quickly as he could sell it, falling into ever-increasing debt as his lawyer grew richer.

When not working on The University of Buckingham website, David Noy is Honorary Associate in the Arts Faculty, Open University, where he is an Associate Lecturer on ancient history modules.  He has published widely on Roman history and Medieval Latin, and regularly gives talks on the history of Winslow. He is also a graduate of the MA in Biography at Buckingham, which helped him to write the book. Please get in touch if you’re interested in the book: david.noy@buckingham.ac.uk.

A chapter of the book featured heavily in an article in The Mail on Sunday by Claudia Joseph: “The not so shy Lady Di: An aristocratic beauty trapped in a loveless marriage whose scandalous affair gripped the nation.” Click here to read the article.