On Thursday 12 September 2019, University of Buckingham students took part in one of the most realistic Major Incident Training opportunities at Harleyford Marina in Marlow.

The simulated water based exercise allowed Buckingham medical students to work alongside lots of local partners including services such as the Thames Valley Police, South Central Ambulance Service and Buckinghamshire Fire and Rescue, which enabled them to gain real life experience of the role of inter-professional interactions and communication in the health system.

In the week leading up to the exercise students attended a series of lectures, workshops and clinical skills sessions focused on the response to major incidents. On the day, half of the third year medical students were prepared by a professional make-up artist and acted as casualties, while the other half worked with the services to treat their symptoms.

Around 250 people took part in the exercise, with medical students playing an active role in the simulation. Journalism students captured the action throughout the day for the University’s social media channels, giving them experience of reacting to a real-life incident.

Medical student, Rama said: “I was shadowing the Major Incident Medical Advisor today and it was an interesting and great learning opportunity. I would have never known what they do and what kind of thing they get involved in. It was really informative and great fun.”

English literature and journalism student Henry Quilter, who filmed the event said: “It’s a really exciting day for all and a fantastic opportunity for medical students to get some practical experience that they wouldn’t get in a typical classroom environment.”

Once all of the acting casualties were helped on-site, they were sent to Stoke Mandeville hospital, where around 75 medical students gained a different perspective as they participated in a simulated hospital response to the Major Incident.

Dr Tom Evans who is the Clinical Competency and Patient Safety Lead at the University of Buckingham Medical School, commented: “This unique activity allowed our students to learn the importance of multiagency working in order to improve patient safety and deliver the best patient care possible during a large-scale, or mass-casualty incident.”

We’d like to thank all of our participants and sponsors for making the Major Incident a success. The benefit to our future doctors is immeasurable.

Find out more about our Medical School.

With thanks to our event sponsors: 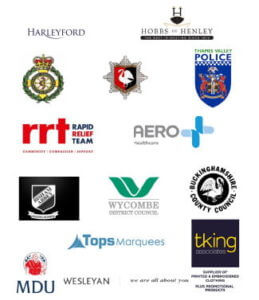