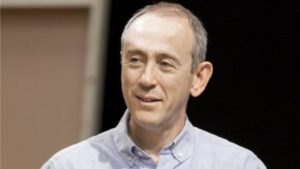 Nicholas Hytner is Co-Founder and Co-Director of London Theatre Company, and was Director of the National Theatre 2003–2015.

At the Bridge Theatre, he has directed Young Marx, Julius Caesar, Allelujah!, Alys, Always, A Midsummer Night’s Dream and Two Ladies. At the National Theatre his productions included Henry V, His Dark Materials, The History Boys, Stuff Happens, Henry IV, Parts 1 & 2, The Habit of Art, England People Very Nice, Much Ado About Nothing, One Man, Two Guvnors, Hamlet, Carousel, The Wind in the Willows, The Madness of George III, Timon of Athens and Othello. In the West End: the original production of Miss Saigon.

He is Executive Producer of the 2020 series of Alan Bennett’s Talking Heads (BBC One), of which he also directed three episodes. His films include The Madness of King George, The History Boys and The Lady in the Van.

His book, Balancing Acts, was published by Jonathan Cape in 2017.