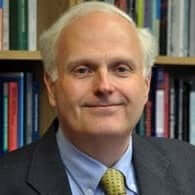 Nicholas Rees is Professor of International Relations and Dean of the School of Humanities and Social Sciences.

His areas of teaching and research include international relations, the European Union, Irish foreign policy and the UN & international peacekeeping.

He has authored/edited a number of books, as well as having edited a number of conference proceedings and produced numerous book chapters and refereed journal articles. He is currently working on a study of the implications of the financial crisis and Brexit for Irish foreign policy, as well as a longer-term project on the role and powers of the UN Secretary-General.

He has led and managed a number of large scale EU funded research and teaching projects. He has acted as referee and reviewer for leading academic journals and publishers, as well as having edited the journal, Irish Political Studies. Key leadership positions have included being President, Political Studies Association of Ireland, executive committee member of the National Committee for the Study of International Affairs (Royal Irish Academy) and a member of the Institute of International and European Affairs (Dublin).