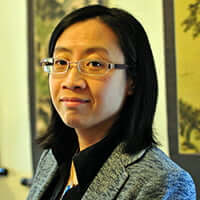 Gar Yein started work as a Lecturer in Law at Buckingham on 1 September 2017. She has held academic posts at Nottingham Trent University (UK), University of Exeter (UK), Central European University (Budapest, Hungary), Universities of Maastricht and Utrecht (Netherlands), and the University of Passau (Germany). She has taught broadly comparative law in the fields of constitutional law and human rights, and has taught a range of English law subjects.

Gar Yein’s most recent publications cover issues of judicial skills, the training of judges and the role of judges vis-a-vis the legislator from a comparative perspective.

Previously, she was an Independent Researcher in the field of Judicial Studies, with particular focus on court and justice management, public law, and procedural law particularly at the intersection between law and technology, from a comparative perspective.  Gar Yein has continued to work on projects for the Organization for Security and Cooperation in Europe, Office for Democratic Institutions and Human Rights and the Council of Europe, European Commission for the Efficiency of Justice (CEPEJ).

For more information about publications and projects, please see her website: www.garyeinng.com or her Orcid Profile.