I joined the part-time LLB course in September 2013. I was looking to fill the gap that was going to be left once my daughter went to university. As a more mature student (then aged 51), I wondered if I would be able to keep to cope with a return to study. However, once I had a few assignments under my belt, there was no stopping me. I loved every minute of the course and really appreciated the time the tutors took to explain difficult and pivotal cases in depth. I enjoyed being at university so much that I became the Part-time law student representative for two years. This meant being the eyes and ears of the course and attending Law Board meetings of behalf of the part-time students. It was very rewarding.

Exploring different options for a legal career, I submitted my CV to the Civil Service Graduate Fast Stream in 2017. I was subsequently offered a position at the Royal Courts of Justice in London, right in the heart of the judiciary. As it happened, during the previous summer, I had travelled to London to visit The Old Bailey and The 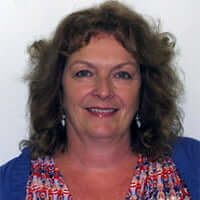 Royal Courts of Justice with a fellow part-time student, Lucy. We looked around the RCJ and popped our heads into the magnificent court rooms. It never occurred to me that, just a year later, I would be working there!

I currently work as part of the small but expanding Judicial Office Courts and Tribunals Reform team, working with the highest-ranking judges of the land on a daily basis. The Reform programme is a six year, £1bn transformation of the courts and tribunals of the UK and is due to be completed in 2022. The aim of the Reform progr

amme is to safeguard the rule of law and to make justice more accessible to all, whilst at the same

time maintaining the constitutional independence of the judiciary. I currently liaise with judges from the five jurisdictions: civil, family, tribunals, crime and magistrates and co-ordinate and action their viewpoints and suggestions on Reform. It’s really fascinating work and a great privilege to be involved in such a significant and important overhaul of the judicial system. No two days are the same and I have finally got used to starting most of my emails with ‘Dear Judge’.

Apart from working in a beautiful building, one perk of working at RCJ is that we are invited to see the swearing in of judges. So far, I have been in court for the swearing in of the Lord Chief Justice, the Lord Mayor of London, the Lord Chancellor and Lord Justice Singh. The wooden panelled courts are steeped in history and the events are always colourful and full of pomp and ceremony. It’s a totally different and intriguing world and my journey to this world began with my part-time LLB at The University of Buckingham.”