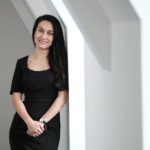 I joined the University of Buckingham in September 2011, knowing very little about its history, its people or the variety of courses that it offered. However, I was attracted by the prospect of completing my LLB in two years, and the excellent staff to student ratio. Although the prospect of starting a condensed law degree was daunting (having come straight from sixth form with a scientific A-Level background), both the university staff and my peers welcomed me to the campus and provided me with the support that I needed to settle in.

Whilst at Buckingham Law School, I became the Captain of the university’s netball team and an active member of the Law Society. I was appointed as an Editor of the university’s first student law review and had the opportunity to work with some of the brightest students in the law school to research and report on complex legal issues. The small student to staff ratio gave us, the students, an opportunity to form close ties with the lecturers and support staff within the Law School, who then went on to support various student-led projects such as the Student Law Review.

I graduated from Buckingham with a First Class Degree and went on to work for a Member of Parliament in Westminster for two years in the run-up to the 2015 General Election. I then spent two months in Paris as a legal intern at Jacobacci & Partners, a European intellectual property law firm, prior to starting the Legal Practice Course at BPP. I am currently in the final stages of my training contract (specializing in commercial contracts and dispute resolution) at Mishcon de Reya in London, and due to qualify in October 2018.

The University of Buckingham has not only played a very important role in both my academic and professional career, but it was a place where I formed life-long friendships with people from across the globe. The two-year course is intense, but it is the best preparation for anyone who is serious about a career in law.