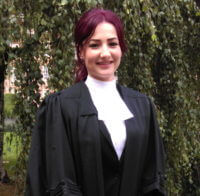 I decided on studying at the Law School at The University of Buckingham because I liked the concept of a two-year degree with a high proportion of small and regular tutorial groups.  I very much enjoyed my time at the University and the experiences, both curricular and extracurricular, have helped to shape my career.  It was the compulsory mooting module that first sparked my interest in advocacy and started me on the road to becoming a barrister! Being able to take part in internal and national moots gave me a fantastic early experience of the courtroom environment and being head of Denning set for the Law Society gave me further involvement in legal training and competitions. It also allowed me to assist other students in developing their skills.

Whilst at Buckingham, I was one of the founders of the University cheerleading team, the Buckingham Bullets, and took great pride in coaching and competing with the team throughout my degree and helping to secure two 1st places and one 2nd place at competitions.

Following graduation, I secured a place on the Bar Professional Training Course at Cardiff University.  I was the only person in my year group to achieve the top grade ‘Outstanding’ and I was called to the Bar in July 2015.

I worked in two solicitor’s firms after completing my BPTC, working primarily as an advocate in Prison law.  I was attending or preparing for hearings daily and mostly I represented serving prisoners at Parole Board hearings to assist them in obtaining their release.  This line of work was incredibly interesting and allowed me to further develop my advocacy skills, which helped in securing pupillage.

I started pupillage at Field Court Chambers in London in September 2017 and moved into my second six in March 2018, when I will be responsible for my own case-load.  My practice will be in Family, Civil and Public law.

I have no doubt that the structure of the LLB in Buckingham and the working relationship the lecturers and tutors are able to build with students, due to the high staff to student ratio, has helped me enormously in my career so far.  All of the Law school staff, not only the lecturers, were incredibly helpful and accommodating and made it a great place to do my degree.