This is a course I would fully recommend to students who are interested in global security and would like to pursue a career in policing and the military. Students do not need to possess prior experience in this field or to have served in the police/armed forces. After receiving my Chevening Scholarship from the Foreign and Commonwealth Office, The University of Buckingham was a crystal-clear choice for me due to the University’s record for excellent teaching and student experience. Moreover, having read the profiles and experience of my professors, I knew BUCSIS would become my home.

Immediately after returning to Cambodia having completed my MA in Security and Intelligence Studies, I was appointed in the position of Assistant to the Deputy Speaker of the National Assembly and became a Police Major, currently working in the Security department of the National Police. 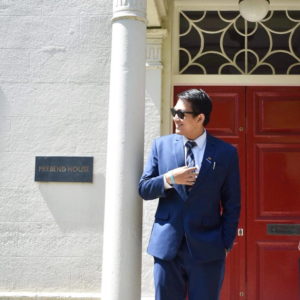 These appointments would not be possible without the Chevening Scholarship and my studies in BUCSIS; this degree became a bridge for me to transfer from my civilian career in the Prime Minister’s office to my current role. What I learnt during my time in BUCSIS has been key towards performing my duties.

BUCSIS professors motivated me to become an independent scholar, focusing on critical thinking and the bigger picture of security and intelligence challenges. Staff members, both in BUCSIS and the University, were amazing; they helped me settle in and made me felt at home since day one. After a fulfilling year in Buckingham, I am very proud to see my flag at the graduation ceremony and be the first Cambodian to graduate from BUCSIS.

I would thoroughly recommend this course to those with an interest in pursuing a career in strategic analysis or areas related to national security. In today’s world, most people starting out in these fields are educated to at least MA standard. Personally, I opted for Buckingham because of the University’s reputation for excellent teaching. Moreover, the knowledge and experience of the teaching staff is invaluable.

Since graduating I have worked as a Regional Analyst (specializing on Africa) and had experience at a national security / foreign policy think tank in London.  It goes without saying I would not have had such opportunities without my time at BUCSIS. In addition to this, the analytical tools I developed at BUCSIS have been an integral part of my activities in both of these positions.

The course is very good. It looks at intelligence historically, but focuses on today’s security issues, and the difficulties many intelligence agencies expeerience in adapting to new threats. Our course lecturers are very much immersed in the field. They are in constant media contact, something which benefits the whole group and makes for lively debate. Students learn to view current affairs, national and international, through an intelligence analyst’s lens, so to better comprehend their impact on national and international security issues. We are also encouraged to participate in extra-curricular seminars which enable us to keep up to scratch with developments in our field. Prebend House, which we use for most of our classes, is ideal for seminars and groupwork, and offers a quiet retreat for optimized postgraduate study.

Before studying in Buckingham, I was looking for a subject in which I was really interested. I was one of the ones who think “your job should concern what you have been trained for”. I had already been interested in security studies before I chose Buckingham University’s MA Security, Intelligence and Diplomacy programme. In fact, I did not know what I would do before enrolling and I was scared of wasting one year in there just to take a piece of paper at the end with nothing more.

However, Julian Richards and Anthony Glees cleared my worries from the very first class which was “Intelligence Tradecraft and Machinery”. They were speaking so wisely about security and intelligence that I started to have a feeling studying would well worth it. We attended many activities and we have been taught and trained by many professionals. Everything I saw here at Buckingham has proven that it would not be a simple MA degree.

Myself, I took the joint programme which was MA Security, Intelligence and Diplomacy and I found the program rich concerning the variety of the courses that I took. I took both Diplomacy classes which were related to my BA programme and learned something precious from the Security and Intelligence field.

I have learned many things in there and am sure that it will not be the end. The program coordinators Dr David Armstrong, Prof. Anthony Glees and Dr Julian Richards were always open to new ideas as well as they are quite focused on solutions. I still keep in touch with many people even though I am not a student anymore. Everyone I met during the program was so energetic that I found a way to cope with tough program subjects… I can recommend coming to The University of Buckingham and studying in BUCSIS to everyone who is looking for a demanding but joyous Masters programme…