In October 2019, BUCSIS launched an exciting new programme with our partners, the War Studies University (WSU) in Warsaw, Poland. The Diploma Studies Certificate in Global Affairs and Diplomacy is an international high calibre program tailored both for professionals working in and around diplomatic roles, and those with aspirations for a career in diplomacy. The program comprises a number of extra-mural sessions at the premises of the WSU in Warsaw, in addition to two intensive teaching weeks: one in Warsaw and the other at the campus of The University of Buckingham.

The programme continues to go from strength to strength with the most recent teaching week held at the University of Buckingham in June 2022.

The Centre for Security and Intelligence Studies (BUCSIS) at the University of Buckingham was founded in 2008 at the beautiful Buckingham campus in southern England. It has since gained an international reputation as one of the premier postgraduate university centres in which to study security, intelligence and diplomacy. Our own MA program in Security, Intelligence and Diplomacy has been running very successfully for some years, and we are very proud to extend cooperation to our prestigious new partners in the shape of the War Studies University. 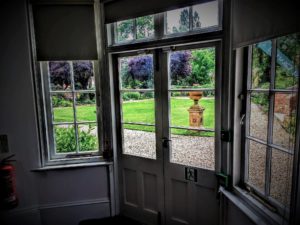 View from the Willowbank seminar room, University of Buckingham

BUCSIS has a particular interest in developing new programmes aimed not only at traditional students but also at professionals working in these subject areas, and to do so in an international environment. To this end, the partnership with the War Studies University on the Diploma Studies Certificate in Global Affairs and Diplomacy will significantly enhance these objectives and allow us to build a long-term academic relationship of mutual benefit with a partner of distinction. With a mixture of robust academic credentials and practitioner experience in governmental roles, BUCSIS and WSU are both well positioned to deliver education of the highest quality in the strategic issues surrounding global affairs and diplomacy in the rapidly changing contemporary geopolitical landscape. This promises to be a unique programme that will prepare professionals to tackle some of the most pressing international security challenges.

The War Studies University in Warsaw, Poland, continues the heritage of The Higher War College in the country and in exile (1919-1946).  The university educates officers for the needs of commands, staffs, military and civilian institutions connected with state defence.  It also prepares civilian students to perform tasks in the domain of national security and crisis response systems.