The Paris study week takes place towards the end of the second term and provides students with an invaluable opportunity to consolidate what they have learned over the two taught terms of the MA in Decorative Arts and Historic Interiors. Students spend one week in Paris exploring the riches of the collections of decorative arts in museums such as the Musée du Louvre, the Musée des Arts Décoratifs, the Musée Cognac-Jay and the Musée Carnavalet. They also have the opportunity to visit some of the hidden delights of Paris and to examine the spectacular architecture of the Second Empire. Some of the greatest French interiors of the seventeenth, eighteenth and nineteenth centuries are to be found in banks and embassies and other government buildings not normally accessible to the public. Among those visited in the past have been the Hôtel Charost and the Hôtel de Beauharnais, the Hôtel de Lauzun and the Hôtel Lambert. The Paris study week provides a rare opportunity to study some of the most important collections in the world, in the company of French curators and archivists. The study week also includes visits to châteaux near Paris, including a private tour of some of the lesser-known rooms at Versailles, and visits to the Petit Trianon, Malmaison and Chantilly. 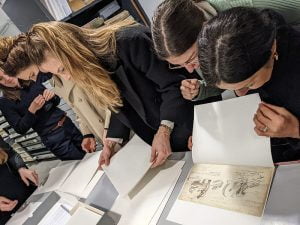 Visit to the Sèvres archives

The Paris Trip was an incredible immersion in the French Decorative Arts. It brought to life what had been learned in the first term, swapping slides and textbooks for the experience of being guided by experts in situ. My experience of Paris that week was much richer than any previous visits. There were so many memorable moments, and not just the star events. To be led by Dr Macnaughton through an archway in a quiet corner of the oft-visited Place des Vosges and emerge in the peaceful Hôtel de Sully courtyard was thrilling, as was the ‘discovery’ of a working Fontaine Wallace later on. We met curators and specialists whose generosity and enthusiasm about their passion for the decorative arts was inspiring. Our visit to the 18th-century period rooms of the Louvre, when it was closed to the public, guided by the senior curator Frédéric Dassas was breathing-taking, both literally and physically. We stumbled out at the pyramid from the shuttered, empty rooms of the Louvre blinking hard into the sunlight after having been led around by the fleet of foot – and mind! – Monsieur Dassas. A truly memorable morning from a fabulous week.

Paula Thompson, part-time student on the MA in Decorative Arts 2021-23 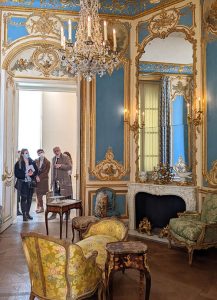 “The best experience of the trip was definitely our tour of the château of Versailles. I was especially delighted that I didn’t have to leave over an hour before our scheduled show time. Our tour was led by a senior palace curator and the famous (at least to us) John Whitehead, who wrote the best book on the architecture and furnishings of the château. I think we were all a little star struck in the nerdiest of ways when we met him, with his English watermelon colored chinos and green bow tie.  He was amazing. It’s absolutely verboten to teach while taking people through Versailles. Unless of course, you’re John Whitehead, and then you get the head curator to accompany you for the whole day, opening doors into rooms that NO ONE gets to see. It was a little mad trying to take notes and pictures, listen to his voice rather than the annoying tourists, and avoid being pick-pocketed by the zillions of tourists who were packed into the formal state rooms with us. But, not to fear – we left those mere mortals behind as we tucked in behind the rope of Louis XV’s formal state room and walked into his private closet to begin the private tour. This would be the point at which the curator pulled out the most amazingly long old, old keys which unlocked door after door of private Royal Family apartments.  Now, I’m not going to lie, it is possible to buy a special ticket to see some of the private apartments. But, those are basically the ones on the main floor. Not shabby, but that was what we saw before lunch. The whipped cream of the whole experience is when you climb up rickety back staircases to the 2nd and 3rd floors to hang out in Madame du Barry’s apartments or to see the small private rooms which were decorated for Marie Antoinette’s use when she finally had the Dauphin.” 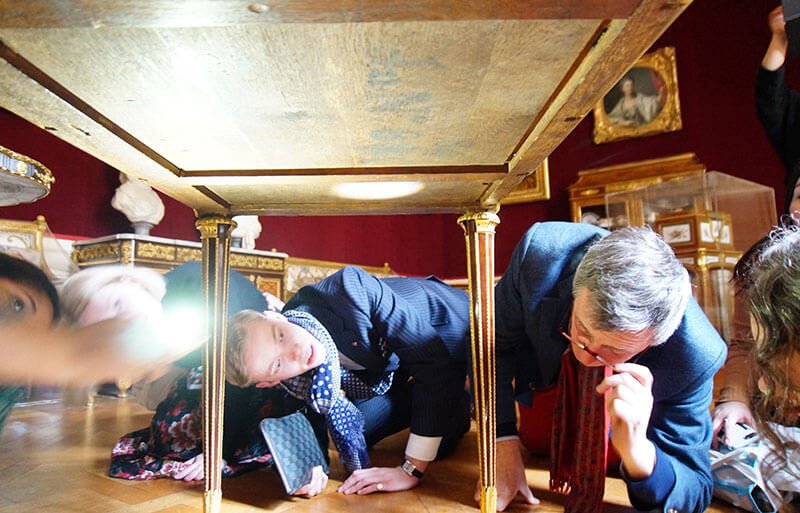