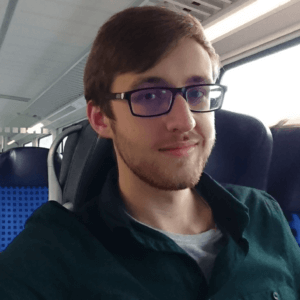 My road to studying BSc Computing at The University of Buckingham was somewhat indirect. After completing my A-Levels I knew I wanted to study at university. However, having had no prior formal exposure to computer science I was unsure whether it was really suitable for me. I instead initially opted to study a primarily mathematics-focused bachelor’s degree with computing at another university. I left after two years of studies with the intent to shift my focus to computer science.

In advance of making any formal application, I made enquiries to Buckingham and was readily invited to visit and meet with department staff, discuss what was right for me, and how and when I could start. Flexibility was offered due to my previously studied applicable modules and, therefore, I was able to join the BSc Computing programme in the second of the four half-year terms. The two-year bachelor’s degree programme appealed to me, as it was not a case of increased pressure beyond what is fairly expected, but simply was efficiently structured, notably without long breaks between terms.

Despite starting later, I was easily welcomed among my fellow students and we supported each other in our studies. The close-knit nature of the department really helped, and I was impressed with the openness and support of all the staff, both teaching and administrative. I absolutely have the environment to thank for achieving my best. I received the British Computer Society Award for Best Performance and the University’s G-Volution Prize for Academic Distinction upon my graduation in 2017.

After completing my studies, but before graduation, I started a job as a graduate software engineer for six months. My bachelor’s thesis made a good impression as part of the interview process, and on the job, I was able to quickly apply my studied skills. While I greatly enjoyed my time at work in software engineering, I moved on as a unique opportunity arose to work and study as a Marie Curie Early Stage Researcher in Germany. I applied for the position and was accepted on a three year contract as part of the AMBER (enhAnced Mobile BiomEtRics) training network at Otto-von-Guericke-University Magdeburg, under the supervision of Prof Jana Dittmann and Prof Claus Vielhauer. I presently continue to work on the AMBER project in privacy in biometrics, including writing open access published papers, and I am on track to achieve a master’s degree alongside completion of the project this year.