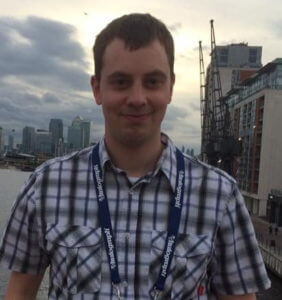 I felt that I never fully performed to my best during my A-levels and had rather modest expectations of what I could achieve when I started university. I was intrigued by The University of Buckingham’s personalised approach to teaching which contrasted the method used by more traditional universities. While at the university I was given the chance to work on two side projects which gave me a taste of the requirement gathering process and helped develop software design skills by working with real clients. This experience was valuable to my future career progression and drove me to do well in my remaining studies. So, 2 years later, I was particularly pleased to graduate with First Class honours.

After graduating from Buckingham, I was offered the chance to interview at Vitalograph. After a successful interview I started working as an Assistant Data Manager. This role introduced me to the clinical trial industry and all the regulation and testing that comes with it. It was great managing large databases and datasets for some of the most well-known pharmaceutical companies in the world.

The role also gave me an opportunity to improve my skills as a Web Developer which I would list as my true passion, eventually leading to me moving into the company’s Research and Development department as a Software Development Engineer which is my current role at the company. Despite it being a highly demanding job supporting the company’s clinical trial and healthcare software offerings I still much enjoy the role, especially the scale and scope of some of the projects our team works on.

Studying at The University of Buckingham helped motivate me to push myself to achieve my full potential. The close-knit community and learning in small groups helped me excel and provided me with a strong platform for my career going forward.