Who was St Rumbold? He was an infant saint from Anglo-Saxon times, who lived for only three days. He may also be known as Rumwold, Rumwald, or Rumbald.

When and where was he born? As far as we can tell, Rumbold was born (and died) in about AD 650. He was of royal parentage; his mother was Cyneburga, daughter of Penda, King of Mercia, and his father was Alchfrith, son of the King of Northumbria. Rumbold’s parents were travelling northwards to meet Penda. The party stopped and camped in a field near King’s Sutton, Northamptonshire and it was there that Cyneburga gave birth to Rumbold. King’s Sutton is 12 miles west of Buckingham, between Brackley and Banbury. 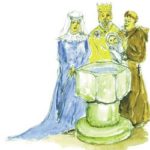 What happened next? Rumbold was precocious from the start. On his first day he said three times in a loud voice “I am a Christian” and sought Christian baptism. At this time, in the mid-7th century, few people in England would have been Christians. There were immediate problems in finding a baptismal font. A suitable bowl-shaped stone in a nearby hut was suggested but this was far too heavy to move. However the infant Rumbold told his entourage to go back to the hut and bring the stone “in the name of the Lord”. This was then done, miraculously easily, and his baptism took place.

And then? The next day Rumbold further astounded everyone by preaching a sermon on Christian virtues and the Trinity. On the third day he said that he was going to die, seeking to be buried where he was born for one year, then at Brackley for two years, and finally for his bones to rest for all time at a place which would later be known as Buckingham. 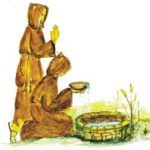 Is there any supporting evidence? Yes, as legendary history. The supposed baptismal font can still be seen in King’s Sutton Church. Then, in the 1070s, shortly after the Norman Conquest, the life of St Rumbold was written down in the scriptorium of Bishop Wulfstan of Worcester, one of the few remaining Anglo-Saxon bishops in a Church now packed by Norman appointees. Accounts of Rumbold’s miraculous life were widely circulated in the Middle Ages and his tomb and shrine in the old church of Buckingham became an important focus for pilgrims. Many came to take the curative waters of St Rumbold’s Well close to the town. The earliest inns of Buckingham were reputedly founded and flourished on the pilgrims’ trade.

What remains today? Unfortunately very little. Pilgrimages to Buckingham ceased after the Reformation and St Rumbold’s shrine and tomb seem to have been demolished when the old Buckingham church fell down in 1776. Regrettably nothing was transferred to the present-day church built on Castle Hill. However there is a recently-erected memorial in the old churchyard which reads: 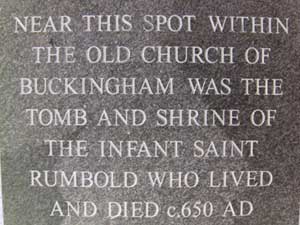 Is there anything left of St Rumbold’s Well? In this case, yes. Through the efforts of a local St Rumbold’s group under the auspices of The Buckingham Society the site, which was threatened by new house-building, has now been protected and partly restored. Formal scheduling as an ancient monument was carried out by English Heritage in 1999 and better access has been established.

The ancient well itself is clearly marked on John Speed’s map of 1610 (the first town map of Buckingham) and in 1623 a rectangular conduit house was built over the top. Lead water pipes were laid to Castle House, the largest 17th century house in Buckingham. The ruins of the conduit house have been excavated and preserved. Medieval ‘ridge and furrow’ evidence can be seen in the adjacent field. The well is marked below on the Speed map and on a modern map of the same area. 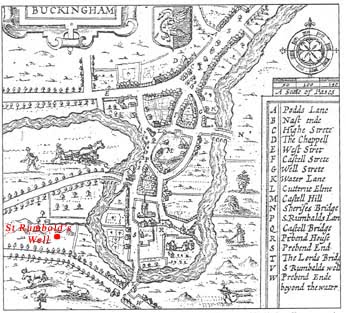 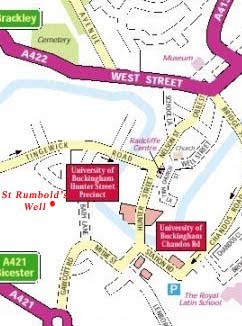 The St Rumbold’s group has been funded by Aylesbury Vale District Council, Buckingham Town Council, Buckingham and Gawcott Charitable Trust, Buckinghamshire County Council Environmental Services, Buckinghamshire Historic Buildings Trust, the Local Heritage Initiative and New College, Oxford. Their support has been much appreciated by the group, which has enabled historial and archaeological surveys to be undertaken, physical repair work to be carried out on site, and an information board installed. 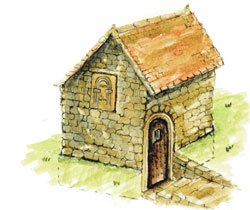 Did St Rumbold’s fame extend beyond Buckingham? Certainly. In pre-Conquest times at least six monasteries in Mercia and Wessex observed his cult and probably others elsewhere. Churches currently dedicated to him survive in Northamptonshire, Dorset, Kent, Lincolnshire, Essex and North Yorkshire. He is also remembered in street and other place names, and in the 17th century was the patron saint of the fishermen of Folkestone. However the similar-sounding church of Sint-Rombouts-Kathedraal in Mechelen, Belgium, is connected with a quite different saint although he also happened to live in the 7th century.

How can I find out more about St Rumbold? The Old Gaol Museum in the centre of Buckingham has a leaflet called ‘St Rumbold’s Ramble’, price 75p. This describes, with a colourful map, a short walk through Buckingham to the ancient site of St Rumbold’s Well nearby. The walk passes through part of the University. The Museum itself has a section depicting St Rumbold and his Well.

Professor John Clarke’s article, “Medieval and post modern biography: the example of the Vita S.Rumwoldi“, The St Andrews University (Osaka) Journal of Christian Studies 21 (1997), 49-71, can be downloaded as a PDF file of 52 KB: rumwold.pdf.

For further reading the following are suggested:

The text for this page was written by Rodney Shirley, with pictures by Dennis G. Osborne, John Credland and Barbara Shirley.