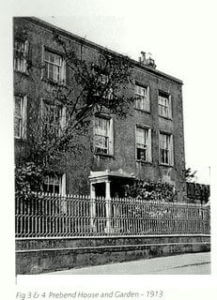 The first clear evidence of Prebend House is in John Speed’s map of 1610. It is possible that some of the interiors actually dates from that time.

The name Prebend(ary) is given to quite a lot of buildings in this part of Buckinghamshire and John Speed’s map shows a large house, Prebend End Manor on the site of the Island Car Park.

Like other houses on Hunter Street in the 17th century, Prebend House was probably occupied by a tanner and the Speed map shows tanning pits in the gardens between the house and the river. The preparation of leather was an important industry in Buckingham in the past and much of it was sent to Northampton, which became the most important national centre for boot and shoe making.

Like many old Buckingham houses, Prebend House was re-modelled in the early 19th century to give it a more modern and fashionable exterior. We see the early 19th-century front of the house that faces Hunter Street today. At this time also some elegant panelling was installed in rooms on the ground and first floors, although sadly vandals have destroyed this in recent years.

In the late 19th century and early 20th century Mr Rogers, a prominent figure in the town and several times Mayor, occupied Prebend House. His business, that of an agricultural merchant, took up many of the buildings on the present Hunter Street site. He was well known nationally as a breeder of champion shire horses.

Rogers was an enthusiastic supporter of the Temperance Movement and welcomed the Salvation Army of Buckingham. It is known that the founder of the Salvationist movement, General Booth, was a regular guest of the Rogers family at Prebend House. 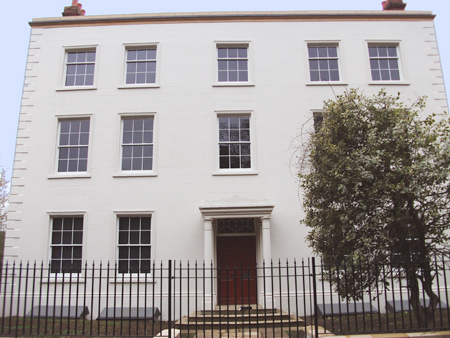 Prebend House in 2011 after restoration of the exterior

In 2010 the University commissioned builders to commence work on the first phase of the restoration of Prebend House. The single- and two-storey additions to the south and north were demolished in line with recommendations from the Historical Society, thereby highlighting the original proportions of this listed building with its imposing stucco classical façade. The first phase objectives were principally to stabilise the building, render it safe and prevent further deterioration. The second phase, restoration of the interior, is now progressing with the aid of a £1 million donation from Lord Tanlaw.

Prebend House is another major property in The University of Buckingham portfolio of listed and historic buildings that it has managed to maintain or restore within this area of Buckingham.