The astrobiology research programme being conducted by members of BCAB covers a wide range of topics including:

1. Investigating cosmological scenarios for an origin of life, with particular emphasis on the Hydro Gravitational Dynamics cosmology of C.H. Gibson and R.E. Schild, thus combining cosmology and astrobiology.

2. Exploring dynamical highways for the transfer of life-bearing material in space, from an initial origination event across planetary systems, galaxies and the Universe.

3. Examination of micro-particles collected in the stratosphere, searching for microfossils, biological signatures and viable microbes.  Studies will be conducted to determine how microorganisms can reach the stratosphere.  Do they originate from Earth or space, or a combination of both sources?  Studies are also in progress on the microbiology of volcanic ash in relation to this question.

4. Investigation of the thermal histories and dynamical evolution of comets in relation to data obtained from spacecraft studies of cometary bodies.

5. International collaborations include invited participation as a major partner in the forthcoming Russian Bion-M, Photon-M satellite programme.  Flights planned for launch in 2013 will include astrobiology experiments designed, tested and supplied by members of BCAB. 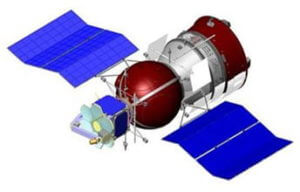 6. Continuation of the pioneering work of Hoyle and Wickramasinghe on the identification of spectroscopic signatures of biomolecules in interstellar material to be all-pervasive in the Universe.

Cosmological constraints on the origin of life

The existence of complex life forms on the Earth is a cosmological datum as important and relevant to cosmology as the Hubble expansion of the Universe.  The biochemical complexity of life at the molecular level is argued to point to an ancestry of life that extends much before life first appeared on Earth.  The moment of time when evidence of life exists in the rocks (enhancement of the 12C/13C ratio) has been placed at between 3.8-4Gyr ago, although evidence of transient liquid water (from study of zircons) may go back to 4.2Gyr, affording short-lived habitable niches even earlier in the geological record.  However, arguments based on genetics give an antiquity of life very much earlier – perhaps going back to 13 Gyr – close to the time of the presumed Big Bang Origin of the Universe (Wickramasinghe, 2011, Observatory, June issue).  The superastronomical improbabilities associated with the origin of even the simplest life (Hoyle and Wickramasinghe: Evolution from Space, 1981) inevitably directs one to seek a solution to this problem in the vastest possible cosmological setting.  In the Gibson-Schild HGD cosmological model all the material of the Universe was in the form of 1080 Earth-mass planets between 2 and 8Myr after the “Big Bang”.  These primordial planets in an infant Universe provide a connected primordial soup on a scale that would not be repeated at any later stage of the history of the Universe.  It is in such a model that we have proposed that life is most likely to have originated (Gibson, Schild, Wickramasinghe, 2010).  Work on this model continues at BCAB with ongoing collaborations with UC San Diego and Harvard. 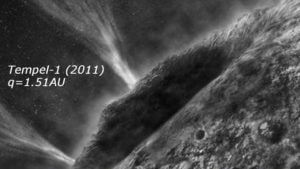 Space exploration of comets over the past 25 years has led to major revisions of ideas about the nature of these objects.  The old “Whipple Dirty Snowball” model of comets has given way to comets chock-a-block with organic molecules that that could have a relevance to life.  Comets were seen as hard-frozen solid bodies and the presence of liquid water was considered impossible for a long time.  However, theoretical arguments for the existence of liquid water in comets were predicted by Hoyle and Wickramasinghe in 1977, and this has been confirmed experimentally only in the past 5 years.  The presence of clay minerals, and in some cases direct imaging of what appear as water jets is consistent with liquid water in comets.  As space exploration continues, the case steadily grows for comets being the bringers of life, as proposed by Hoyle and Wickramasinghe over 30 years ago (Wickramasinghe, J.T., Wickramasinghe, N.C. & Napier, W.M. 2010. Comets and the Origin of Life)

Fragments from comets, including organic particles, thrown off into space have been swept up by planets including the Earth over millions of years. The Earth now collects roughly 100 tonnes a day of such material mixed with meteorite dust. From an altitude of 70-100 km this dust settles through the middle atmosphere and stratosphere. Uplifting of material from the Earth’s surface also occurs and the distinction between incoming and uplifted material has to be carefully made. In the mid-1960s stratospheric detections of microorganisms were claimed from balloon experiments conducted under the auspices of NASA. But these early detections were not taken seriously, in part because of contamination problems. 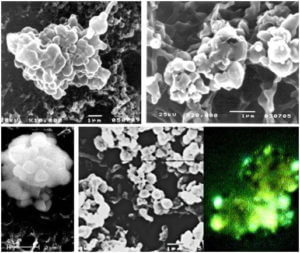 In 2001 and 2009 scientists at several research institutes in India operating under the auspices of the Indian Space Research Organisation (ISRO) embarked on a project to collect stratospheric aerosols aseptically from heights of up to 41 km.  The aim was to isolate cometary dust in these samples and look for evidence of life, past or present, in comets.  The cryogenic sampler technique used in this project is described by Narlikar et al (Proc. SPIE, 3441, 301, 1998).  The samples from the 2001 collection were shared with the Cardiff group (now BCAB) and we have obtained a wealth of information bearing on the “Life in Comets” theory.  The figure above shows a montage of images showing a range of microparticle structures, bacterial morphologies, evidence of viable microbes through fluorescence, and cultures of microorganisms as well.  We continue this work at BCAB, in particular evaluating viability of microbes in the stratosphere, and assessing pathways by which terrestrial microbes can reach the stratosphere.  In a related project we are collaborating with Professor Godfrey Louis of Kochin University to examine samples of red rain of Kerala that fell in 2001 and 2009.   So far we have not been able to fully identify these cells with any known terrestrial microorganism. 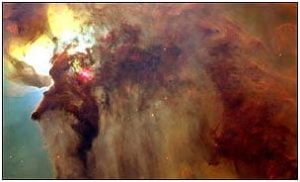 The space between stars in the Milky Way contains clouds of gas and dust from which new stars and planets continue to form (See Hubble Telescope image, above).  Pioneering work by Chandra Wickramasinghe (BCAB) and the late Sir Fred Hoyle pointed to spectroscopic correspondences between material in these clouds and biomaterial from the late 1970s.  At first such correspondences were confined to the visual and infrared wavebands, but now the similarities extend over a much wider range from the mid-infrared into the far-ultraviolet.  The existence of polyaromatic molecules and complex organics on a vast astronomical scale is now widely accepted, and a flood of data coming in from the Herschel Telescope,  ESA’s Infrared Space Observatory and the Hubble Telescope is allowing us to confirm and extend these identifications.  Molecules related to biology have now been discovered in external galaxies as well – extending to distances that represent a substantial fraction of the radius of the observable Universe.  The tendency to assert that these molecules represent prebiotic chemical evolution – steps towards life – occurring everywhere is most likely to be wrong.  The ideas developed at BCAB suggest the organic molecules in the universe mostly represents the detritus of biology – the degradation products of life.  Life cannot originate more than once as a unique cosmological event, but thereafter its spread is inevitable.