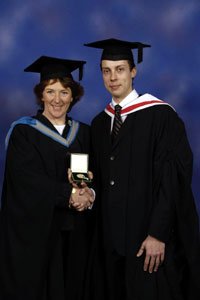 In 1993, a solid Gold Medal, ‘The Edgar Palamountain Award for Excellence‘, was instituted in memory of Edgar Palamountain, Chairman of
the Council at Buckingham from 1979 to 1984. The award is given every year to the undergraduate who is judged ‘first among equals’.

“Winning the Edgar Palamountain Award for Excellence is an achievement I could not have expected when I first embarked on my studies at Buckingham. It is a great honour to be judged first among equals, according to criteria found in the 15th Psalm.

It is difficult to express how I feel about the success I have had at the University. The Law School at The University of Buckingham fosters an environment conducive to academic achievement, which was a major contributor to my academic performance. The dedication of the faculty, their expertise and experience, and their willingness to challenge students at every turn allowed me to get the best possible legal education imaginable.

My experience at the University not only prepared me for my career in law, but was also an enjoyable and memorable two years. Apart from academic life, the size of the school and the diverse student base allowed me an experience I do not believe I could have received elsewhere. Both the academic and non-academic aspects of the University culminated in me winning this humbling award, and I could not be prouder of myself and all I have achieved.” 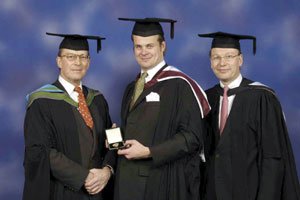 “When my lecturer, Mr VS Mahesh, called me three days after the results were published telling me that I should be awarded the ‘Dame Barbara Shenfield Award‘ I was very thrilled and surprised.

Later at the graduation I was also told that last year a Service Management postgraduate from Hamburg was awarded the prize. I hope that the tradition can be continued over the next years.

It was a great honour to meet the Mr Peter Lewis and Mr Martin Shenfield, sons of Dame Barbara, before the ceremony and later to receive the medal by them. Let me take this opportunity to thank them again and of course my lecturer Mr VS Mahesh.”