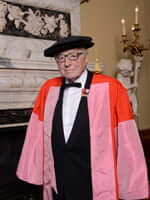 After a military career spanning twelve years (1940-1952), Sir Ronald Grierson became a banker and industrialist, while also continuing his public service by holding at different times a series of government and government-related posts.

During the 1939-1945 War, Sir Ronald held a commission in the Black Watch Regiment and was seconded to the Special Air Service (SAS), from which he was demobilised at the end of 1947. He subsequently commanded the first peacetime SAS unit as a Territorial officer, from 1948 until 1952. During a short interval in his military service (1948), he was attached to the United Nations in Geneva as personal assistant to the Executive Secretary of the UN Economic Commission for Europe.

From 1952 until 1996 Sir Ronald served both as Managing Director of S. G. Warburg, the merchant bank, and as Vice Chairman of the General Electric Company (ultimately Chairman of GEC International) as well as on the boards of other US and European corporations. Among other appointments, he has served as Chairman of Bain & Co. International, and as Co-Chairman of the International Advisory Board of the Blackstone Group.

His commercial career has been punctuated on four occasions by government service: first as Deputy Chairman and Managing Director of the UK Industrial Reorganisation Corporation; second as Director-General of the European Commission in Brussels; later as Executive Chairman of the South Bank Centre, London’s principal art venue; and also as adviser to the Secretary-General of the United Nations.

He continues to serves on boards and advisory boards in Europe and the USA and is chairman of several international philanthropic bodies in the fields of medicine, education and the arts, among them: Action Against Hunger, The Voices Foundation, The European Organisation for Research and Treatment of Cancer, and as Co-Chairman of the Louis Dreyfus-Weidenfeld Scholarships to the University of Oxford. He is a Trustee of the London Symphony Orchestra and of the Royal Academy of Arts. 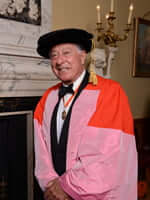 He served as Chairman and Managing Director of the British Land Company from 1971 to 2006, of which he remains Honorary President. Under his guidance, the assets of the company grew from £6 million to some £20 billion. He also currently serves as the Chairman of Delancey’s Real Estate Advisory Board, and as Chairman of the Alpha Plus Group, which now comprises more than twenty schools and colleges.

His eminence in business is more than equalled by his distinction in the field of philanthropy, where he has been a munificent benefactor of charities and institutions supporting the arts and education. He is Vice Chairman of International Students’ House; a Commissioner Emeritus of the Crown Estate Paving Commission; Vice President of Weizmann UK (formerly Member of the Board of Governors of the Weizmann Institute of Science); Vice President of Seafarers UK (King George’s Fund for Sailors); an Honorary Fellow and Vice President of the Council of the Royal Institution; and he has served as the President of the London Festival of Architecture, 2010. His interest in architecture has also been acknowledged by the Royal Institute of British Architects with the award of an Honorary Fellowship.

Between 1995 and 2003, Sir John was a board member of the British Library, a period which coincided with the library’s move from the British Museum to its new home in Euston Road. He is the sponsor of the Sir John Ritblat Gallery in the new British Library building, which houses many of the library’s most important treasures. He was knighted in 2006 for his service to the arts.

Sir John Ritblat been equally generous in his support for amateur sport and the development of the young. He is the Honorary President of the British Ski and Snowboard Federation; and in his different guises has been the principal sponsor of the British Alpine National Ski Championships for the last thirty-five years. He is also Vice President of the Tennis and Racquets Association. 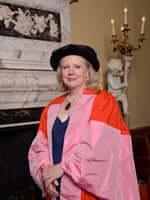 She began her career as a Museum Assistant in the Ceramics Department of the Victoria and Albert Museum in 1973, moving to the Wallace Collection in 1974. There she worked for thirty-seven years, becoming an Assistant Director in 1979 and Director in 1992; she retired in 2011.

Her major publication is The Wallace Collection: Catalogue of Sèvres Porcelain (3 vols, 1988), which won her the National Art-Collection Fund Prize for Scholarship in 1990, and she has written numerous articles and papers, chiefly on Sèvres porcelain..

Her contribution to scholarship and the arts has been recognized in a number of honours and awards In 1990 she became a Fellow of the Society of Antiquaries, in 2000 she was awarded a CBE for services to the Study of Ceramics. She won the European Woman of Achievement Award (Arts and Media) in 2005. The following year, she became a Fellow of the British Academy, and in 2009 she was appointed DBE for Services to the Arts.

She is a Professorial Research Fellow at The University of Buckingham’s Humanities Research Institute and is a Visiting Professor at the University of the Arts, London. In addition, she teaches on many MA programmes in the Decorative Arts and lectures widely in the United Kingdom, Europe and the United States of America.

She was a member of the Conseil d’Administration of Sèvres Cité de la Céramique, France, Governor of Camden School for Girls, and currently her Trusteeships include the Royal Collection Trust, the Samuel Courtauld Trust, the Buccleuch Living Heritage Trust and the Hertford House Trust. She is also President of the French Porcelain Society, and on the Arts Panel of the National Trust, the Expert Panel of the National Heritage Memorial Fund, and on the Academic Committee of the Rothschild collection at Waddesdon Manor. 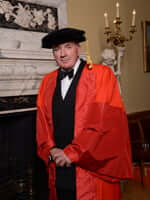 Commissioned after two years training at the Royal Military Academy Sandhurst, into The Green Howards in 1971, Lord Dannatt was a soldier for forty years. Educated at Felsted School and St Lawrence College, and later at Durham University, he served on seven tours of duty in Northern Ireland – during the second of which he was award the Military Cross for gallantry – and also with the United Nations in Cyprus. He later served in Germany before going on to command the 1st Battalion the Green Howards from 1989 to 1991. From 1994 to 1996, he commanded the Fourth Armoured Brigade, again in Germany and also in Bosnia during the early days of the implementation of the Dayton Peace Agreement.

After heading the Defence Programme Staff during the Strategic Defence Review of 1997-1998, he took command of Third (United Kingdom) Division in January 1999, and also served in Kosovo that year as Commander, British Forces. In 2000 he returned to Bosnia as the Deputy Commander Operations of the NATO Stabilisation Force (SFOR). From 2001 to 2002, he served as the Assistant Chief of the General Staff in the Ministry of Defence before taking command of NATO’s Allied Rapid Reaction Corps (ARRC). In March 2005, he took over as Commander-in-Chief Land Command, and assumed the appointment of Chief of the General Staff in August 2006, handing over to General Sir David Richards three years later. Since 2009, he has served as Constable of HM Tower of London (and ex officio a Trustee of Historic Royal palaces and the Royal Armouries).

In addition to his main appointments, General Dannatt also served at various times as Colonel Commandant of the Army Air Corps, Colonel of the Green Howards, and Colonel Commandant of the Royal Military Police. He is President of the Soldiers’ and Airmen’s Scripture Readers’ Association and Vice President of the Armed Forces’ Christian Union. He is a Deputy Lieutenant for Greater London and entered the House of Lords as a cross bench peer in January 2011. General Dannatt is also a Trustee of the Windsor Leadership Trust, a founder patron of the service charity Help for Heroes, a patron of the war-zone charity, Hope and Homes for Children and of Street Child of Sierra Leone, and is a vice patron of St Dunstan’s, which works with blind and visually impaired ex-servicemen and women.

He has received a number of academic awards. He holds Honorary Doctorates in Civil Law from the Universities of Durham and Kent, and in Technology from Anglia Ruskin University. He is an Honorary Fellow of Hatfield College, Durham, and the author of an autobiography, Leading from the Front, published by Bantam Press in September 2010.