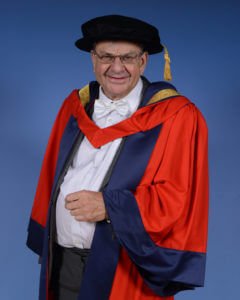 John Clarke grew up in neighbouring Brackley, where has was educated at Magdalen College School. He was awarded a scholarship at Wadham College, Oxford, and achieved First Class Honours in Modern History in 1967. Later the same year he was elected to a Prize Fellowship at All Souls College. While at All Souls he completed his doctoral thesis and published his first book George III. In 1974 he was recruited by Max Beloff to become Dean of Admissions at the University College at Buckingham and was thus one of the first members of staff. He remained at Buckingham until he retired in 2016. Over the years he held a variety of posts including Chairman of the HPE degree programme, Dean of Humanities, Secretary to Council, Acting Deputy Vice-Chancellor and University Orator. He taught undergraduate and postgraduate students throughout. His books include The Price of Progress, British Diplomacy and Foreign Policy, The Book of Buckingham, The Book of Brackley, Yesterday’s Brackley and Victorian Brackley. He contributed chapters to the history of All Souls and the IEA publication Buckingham at 25. 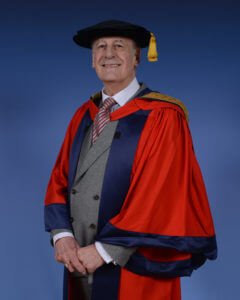 From 1989 -1997 Lord Lingfield was appointed by the Prime Minister to lead the drive for state school· autonomy. He was later asked by The Rt Hon David Cameron to chair the Commission on Special Education Needs; he then undertook a government review of Professionalism in Further Education in 2012; this produced the Lingfield Report. He was then appointed by the government to be the Founder Chairman of the Chartered Institution for Further Education. He has been the author of many policy papers on education. Additionally, he has been Director General of St John Ambulance, Chairman of Goldsmiths College, University of London, and Pro-Chancellor of Brunel University. He founded twenty-five years ago (and currently chairs) The English Schools’ Orchestra and also the League of Mercy, a charity that encourages voluntary work in many healthcare areas. He is also the Chairman of ARNI, a stroke charity and of CVQO (the Cadet Vocational Qualification Organisation). Knighted in 1993 for services to education, his appointment as Knight Principal of the Imperial Society of Knights Bachelor was approved by HM The Queen in 2006. He became Knight President in 2012. He is also a Knight of The Order of St John and has a number of foreign awards. He was created a Peer of the United Kingdom for life in 2010. 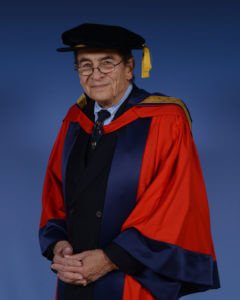 Sir Geoffrey Nice QC, educated at St Dunstan’s College Catford and Keble College Oxford (where he read PPE not law), practised since 1971 as a barrister in England and Wales until 1998 when he started to work for the UN at its International Criminal Tribunal for the former Yugoslavia in The Hague. Between 2001 and 2006 he led the prosecution of ex-President of Serbia, Slobodan Milošević. He was knighted for his contribution to international criminal law. Since 2006 he has practised in international courts, been the Bar’s senior regulator as Vice-Chair of the Bar Standards Board and Gresham Professor of Law. His extensive pro bono work has included being Chair of the China Tribunal into forced organ harvesting of prisoners of conscience in the People’s Republic of China and (current) Chair of the Uyghur Tribunal into alleged Genocide and Crimes Against Humanity of Uyghurs and other Turkic minority groups in the People’s Republic of China. He stood twice for the Liberal Democrats’ cause in the 1980s, is married with three grown-up daughters and grandchildren.