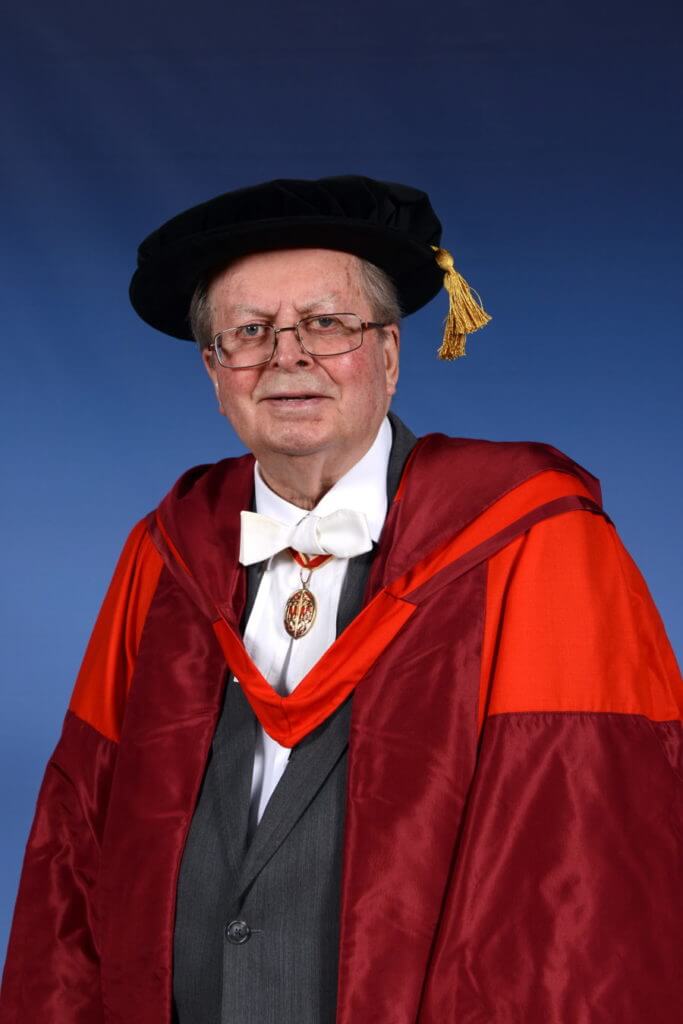 Born in Clapton in 1937, Professor Lord Smith was evacuated after the Luftwaffe’s bombing of Gosport naval base, returning to London in time for the Blitz and V1 and V2 Rockets. He graduated from The London School of Economics in 1958, where he joined the Liberal Party and progressed to teach at a secondary school whilst simultaneously being chair of the Union of Liberal Students and on the Liberal Party’s National Executive. He was a founding member of the New Orbits Group, which sought to modernise party policy, and he fought the 1959 General Election in West Lewisham (he was the youngest candidate of any party that year).

Professor Lord Smith became an academic successively at The University of Exeter, Hull, York, California State LA and Queen Mary London, culminating as Vice-Chancellor of Ulster University during the eventful 1990s. He maintained a close interest in corporate affairs.

He was knighted in 1996 for services to higher education and made a life peer of the Liberal Democrats the following year. He was Liberal Democrat Spokesperson on Northern Ireland for eleven years and retired from Parliament in January 2019. 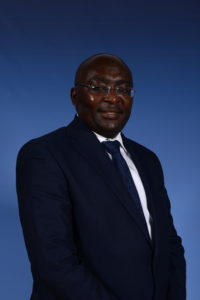 His Excellency Dr Bawumia is an alumnus of Buckingham and current Vice-President of the Republic of Ghana. He studied for an undergraduate degree in Economics and graduated with First Class Honours in 1987. He is a former Deputy Governor of the Bank of Ghana and assumed office as Vice-President of Ghana on 7 January 2017. HE Dr Bawumia is an eminent and successful politician and, consequently, an eminent and successful alumnus. We are delighted to welcome him back to Buckingham to speak to our Graduands and their families. 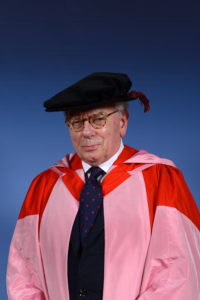 Born in 1945, Professor David Starkey attended Kendal Grammar School before studying History at Cambridge. He is now Honorary Fellow of Fitzwilliam College, Cambridge and one of Britain’s leading historians. After his time at Cambridge, Professor Starkey lectured in History at the London School of Economics until 1998. He is the author of many books; has guest-curated several major historical exhibitions and made some of the most important and widely watched historical documentary series on television.

Professor Starkey is winner of the W.H Smith Prize for Biography and the Norton Medlicott Medal for services to History presented by the Historical Association. He is Honorary Doctor of Letters of the universities of Kent and Lancaster; Visiting Professor at Kent and Christ Church Canterbury; Trustee and Honorary Commodore of the Mary Rose and was made a CBE in 2007.

Read the formal address given at Professor David Starkey’s convocation. 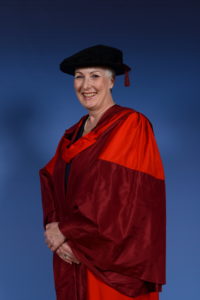 Professor Kate Bullen originally trained as a therapeutic radiographer in Cardiff and held a number of posts in the NHS. Professor Bullen established a cancer support charity in South Wales in 1992 and has an ongoing interest in the psychology of cancer and end of life care. In 2007 she established the Department of Psychology at Aberystwyth University, and led on ethics and equality initiatives across the organisation. Professor Bullen is currently Professor of Psychology and Head of the School of Applied Social Science at the University of Brighton, where she also chairs the University Ethics and Integrity Committee. She is a chartered psychologist, a fellow of the British Psychological Society (BPS), President of the BPS for 2018/19, and is an expert member of the HRA Research Ethics Committee for Wales (REC3). Professor Bullen is a passionate advocate of women’s leadership and development and has been an Athena SWAN panel chair for the Equality Challenge Unit Athena SWAN charter award scheme since 2010.

Read the formal address given at Professor Kate Bullen’s convocation. 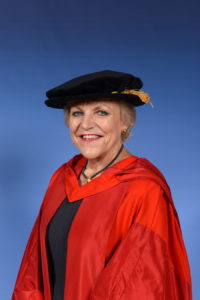 Mrs Anne Miller joined the University in 1983. She was Registrar between 2011-2018 and Secretary to Council from 2013-2018. She is an alumna of the University, graduating with First Class Honours in Law.

Mrs Miller grew up abroad and first came to Buckingham as a boarder at the Royal Latin School. Her early career was in international marketing, working for two French multinational companies – L’Oréal and Valeo. After joining the University’s Language Centre in 1983, she went on to work in the School of Humanities and Law School. In 2002, she was asked to establish the University’s central Quality Office.

As Registrar, Mrs Miller was the senior legal officer of the University and responsible for a range of student-facing Professional Services. She led the University through several successful quality reviews by the Quality Assurance Agency, negotiated its participation in the National Student Survey in 2005 and oversaw its entry into the Teaching Excellence Framework. She also contributed to the establishment and accreditation of the Schools of Education and Medicine. In 2017, she undertook a successful review of the University’s Charter and Statutes.

Mrs Miller is a long-standing member of the Association of University Administrators (AUA) and sits on the Executive of the Quality:Strategy:Network (QSN). She is an expert in the Two-Year Degree and National Student Survey and has delivered several conference papers in these areas. On leaving the University in 2018, Mrs Miller was invited to work with the AUA in establishing AUA Consulting, providing expert consultancy services to Higher Education Providers.

Read the formal address given at Mrs Anne Miller’s convocation. 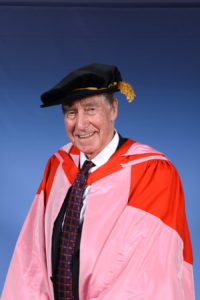 Sir Eric Anderson was educated in his native Scotland at George Watson’s College, St Andrews University and in Oxford at Balliol College. He taught at Fettes College Oxford, Gordonstoun School and was Headmaster of Abingdon School, Shrewsbury School and Eton College, before becoming Rector of Lincoln College, Oxford, and then Provost of Eton. His most important scholarly work is his Clarendon Press edition of Sir Walter Scott’s Journal.

At Gordonstoun Sir Eric taught Prince Charles, at Fettes he was Tony Blair’s Housemaster and he was Headmaster of Eton whilst David Cameron was a pupil there. He has therefore been involved in the education of the heir to the British throne and the leaders of the two biggest British political parties.

He has served as Chairman of the Heritage Lottery Fund and of Cumberland Lodge, and as a trustee of the Shakespeare Birthplace Trust, the Wordsworth Trust and the Abbotsford Trust. He is Visitor at Harris Manchester College, Oxford, a member of the Visiting Committee of Harvard University Memorial Church and a trustee of the Royal Collection Trust.

He has honorary degrees from the universities of St Andrews, Hull, Siena, Birmingham and Aberdeen, and he is an honorary fellow of Balliol College, Lincoln College and Eton. He is a Fellow of the Royal Society of Edinburgh (FRSE) and a Knight of the Thistle. He is the only member of the Order of the Thistle order who does not rank higher as a peer or member of the Royal Family.

He is married to Poppy Anderson (née Mason) and they have two children, David and Kate.

Read the formal address given at Sir Eric Anderson’s convocation. 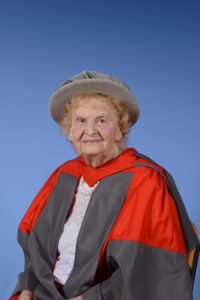 Helen Taylor Thompson signed the Official Secrets Act aged 19 and was part of what was known as then Prime Minister Winston Churchill’s “secret army”; she sent coded messages to spies in occupied France during World War II.

In 1952 Ms Taylor Thompson was elected to the board of the Mildmay Mission Hospital and afterwards sat on a number of Government NHS committees. She later fought the closure of the Mildmay Hospital and became its chair in 1988, when it reopened as the first hospice in Europe for people living with AIDS. Several years later she founded the Mildmay Centre in Uganda, where today over 100,000 people suffering with AIDS are still cared for.

In 1995 Ms Taylor Thompson, alongside Adele Blakebrough and Lord Andrew Mawson, organised the Great Banquet – which saw 33,000 people in London sit down with people from every background to a meal. This event saw the beginnings of CAN (The Helen Taylor Thompson Foundation), a network of social entrepreneurs who shared a commitment to tackle social problems through business.

Ms Taylor Thompson founded Thare Machi Education (TME) in 2000 and remains their Chair. TME use interactive DVDs in local languages to provide basic life-saving information to some of the world’s poorest people – especially women and children. TME lessons have been seen by millions of people in countries throughout Africa, Asia, Eastern Europe and South America.

In 1990, Ms Taylor Thompson was awarded the MBE and in 2005 the OBE for service to health and welfare in the UK and Africa. 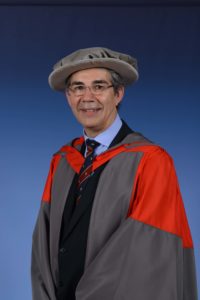 David Nott was born in Carmarthen in 1956 and lived with his grandparents at Trelech, near Carmarthen. He then lived in the Midlands and Rochdale from where he attended Hulme Grammar School. His father, Malcolm George Nott, was an orthopaedic and trauma surgeon and encouraged his son to follow him into a medical career. He also inspired his son’s war work by taking him to see the 1984 film The Killing Fields.

Mr Nott was not successful at school initially but, after resitting his A-levels, he studied medicine at the Universities of St. Andrews and Manchester, graduating in 1981.

As a child, often left on his own, Mr Nott was fascinated with building model aircraft and later learned to fly, gaining both a private pilot licence and a commercial pilot licence

During his medical training in Manchester and Liverpool, he was attracted to surgery. He took a special interest in vascular surgery after watching a Liverpool surgeon, Peter Harris, save someone by operating on their ruptured aortic aneurysm. He combined this with general surgery, practising at London hospitals including Charing Cross, Chelsea and Westminster, St Mary’s and the Royal Marsden. As a vascular surgeon, he specialises in keyhole techniques, especially for repairs of abdominal aortic aneurysms, and distal arterial bypasses. In 1999, he was the first surgeon in the world to perform a femoral-popliteal bypass using only laparoscopic techniques.

He began working in disaster and war zones in 1993, when he saw footage of the war in Sarajevo. He has worked in disaster and war zones for several weeks each year since then, working as a volunteer surgeon for agencies such as Médecins Sans Frontières, Syria Relief and the Red Cross. He has also served in a similar capacity for the Royal Auxiliary Air Force, where he held the rank of Wing Commander. 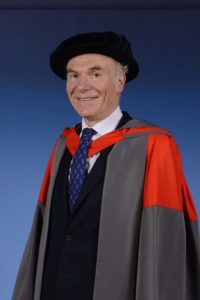 Terence Kealey is a clinical biochemist who was Vice- Chancellor of The University of Buckingham from 2001 until 2014. During his time as Vice-Chancellor, student numbers rose from just over 600 to around 2,000 and he was instrumental and fully supportive in the setting up of both the Medical School and the School of Education.

While doing this research, Dr Kealey learned how distorting government money could be to the scientific enterprise. In 1996 he published his first book The Economic Laws of Scientific Research where he argued that, contrary to the conventional wisdom, governments need not fund science. His second book, Sex, Science and Profits (2008) argues that science is not a public good but, rather, is organised in invisible colleges, thereby making government funding irrelevant. Both works are recognised as vital contributions to the study of science and public policy.

Dr Kealey trained initially in medicine at Bart’s Hospital Medical School, London. He studied for his doctorate at Oxford University, where he worked first as a Medical Research Council Training Fellow and then as a Wellcome Senior Research Fellow in Clinical Science.