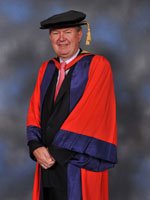 John Blundell
Doctor of Science of the University

John Blundell was educated at King’s School, Macclesfield, and at the London School of Economics. He headed the Press, Research and Parliamentary Liaison Office at the Federation of Small Businesses from 1977 to 1982, and was a London Borough of Lambeth councillor from 1978 to 1982. From 1982 to 1993 he was resident in the United States, where he was President of the Institute for Humane Studies (1988-1991); President of the Atlas Economic Research Foundation (1987-1991); President of the Board of the Congressional Schools of Virginia (1988-1992); and President of the Charles G. Koch and Claude R. Lambe Charitable Foundations (1991-1992).

John Blundell became Director General of the Institute of Economic Affairs on 1 January 1993. He also held the position of Ralph Harris Fellow from 2007 until 2009.

John Blundell is a Director of Fairbridge and of the International Policy Network, and Chairman of the Institute Development and Relations Committee of the board of Atlas Economic Research Foundation (USA). He is also a Board Member of the Institute of Humane Studies at George Mason University, Fairfax, VA; of the Institute of Economic Studies (Europe) in Paris, France; and, until recently, of the Mont Pelerin Society.

He is married to Christine and has two grown up sons. 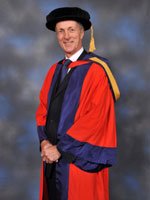 Sir Stuart Hampson
Doctor of Science of the University

His 14 years as Chairman saw steady expansion, the refurbishment of the Oxford Street and Sloane Square department stores, the extension of trading hours, the expansion of the product range and the establishment of an online presence through John Lewis Direct and Ocado, the home-delivery grocery service.

A founding deputy chairman of London First and past President of the Royal Agricultural Society of England (2005/06), he is President of the Employee Ownership Association and continues to champion the benefits of employee engagement in business. Sir Stuart chaired the team tackling Economic Renewal in deprived communities, and he is one of the Prince of Wales’s Ambassadors in this area. He has been a member of the Corporate Leaders Group pressing the Government for stronger action on climate change.

Sir Stuart is a patron of the The Home Farm Trust Ltd, a national charity providing long term support for people with learning disabilities and their families. He lives with his wife Angela in Buckinghamshire and has one son and one daughter.