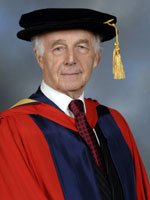 Gordon Jewkes was born in County Durham and was educated in England and Scotland.

At the age of 16 he joined the Inland Revenue. Apart from two years of commissioned service in the Army, he spent the first 20 years of his career in a variety of Whitehall departments, including the Colonial Office.

On entering the newly-formed Diplomatic Service, his terms in the Foreign and Commonwealth Office included a period as Finance Officer of the Diplomatic Service. He also served as Deputy High Commissioner in Trinidad and Tobago, Consul-General in both Cleveland and Chicago, Governor of the Falkland Islands and High Commissioner for the British Antarctic Territory. His final posting was as
Consul-General New York and Director-General of Trade and Investment USA.

Gordon Jewkes has been a long-standing supporter of The University of Buckingham and served on the Council from 1996 to 2001.

Professor Robert Pearce
Doctor of Laws of the University 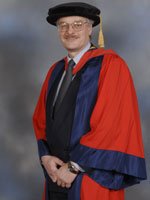 Robert Pearce was educated at Pembroke College, Oxford. His career, prior to joining The University of Buckingham, included appointments at the University of Newcastle upon Tyne, the University of Lancaster and University College Cork in Ireland. He was also Chair of Parkside Housing Association, Windsor and a board member of Rycotewood College, Thame, Oxfordshire.

While at Buckingham he was Professor of the Law of Property and Equity from 1990 to 2003. He was successively Dean of Academic Affairs, Pro-Vice-Chancellor, Deputy Vice-Chancellor and, between the
retirement of Professor Robert Taylor and the appointment of Dr Terence Kealey, Acting Vice-Chancellor.

Robert Pearce was appointed Vice-Chancellor of the University of Wales, Lampeter in 2003. He is also currently Chair of the Universities Association for Lifelong Learning, Cymru and of the International Advisory Board on Government of Ireland Postgraduate Scholarships of the Irish Research Council for the Humanities and Social Sciences.

He is the author of a textbook on Irish Land Law (now in its second edition) and (with John Stevens, a former lecturer at The University of Buckingham) the co-author of The Law of Trusts and Equitable Obligations (in its fourth edition) and of Land Law (currently in its third edition).

Prince Olagunsoye Oyinlola
Doctor of Laws of the University 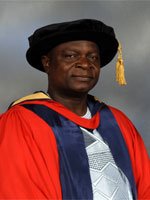 Prince Olagunsoye Oyinlola was born in Osun State, Nigeria. His father, Oba Oyinlola, was King of Okuku where he reigned from 1934 to 1960. He attended the Nigerian Defence Academy and was commissioned as an officer in 1971 reaching the position of Brigadier-General, from which he retired in 1999.

He is currently Governor of Osun State where, earlier this year, the Oshun State University (the personal brainchild of the Governor), a multi-campus University based over six different cities in Oshun, was started. As an advocate of fairness, equity and justice, Prince Oyinlola is on record as believing strongly that society should not be a theatre for unnecessary conflicts but one where tolerance, love, peace and dialogue should flourish. These are goals that our own international community at Buckingham also strives to achieve.

Prince Oyinlola is married to Omolola and they have four children.

Mr Mark Lancaster
Doctor of Science of the University 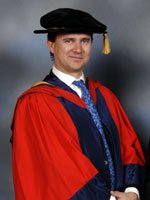 Mark Lancaster was raised and educated in Kimbolton, Cambridgeshire. He read his first degree at Buckingham (Business Studies, 1992) before completing an MBA at Exeter University. Mark had a varied career before entering politics, serving briefly as an officer in the Queens Gurkha Engineers in Hong Kong, and then returning to Kimbolton to work in the family firework manufacturing company.

Mark Lancaster continues to serve in the Territorial Army as a Major and he spent the 2006 summer recess on active service alongside British troops in Afghanistan. This was the third time that Mark volunteered for active service since 2000, having previously served as part of the NATO peacekeeping force in both Kosovo and Bosnia.

Following his election to Parliament in May 2005, representing the constituency of North East Milton Keynes, Mark Lancaster was promoted to the Whips Office in October 2006.

Mark Lancaster lives locally at Olney with his wife Katie, a practicing solicitor. A passionate sportsman, Mark is a supporter of the local MK Dons football team and has opened the batting for the House of Commons cricket team. In his spare time he restores classic British motorcycles as a hobby.

Mr Charles Moore
Doctor of Letters of the University 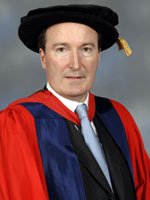 Charles Moore was educated at Eton and Trinity College, Cambridge, graduating with an MA in History. He began his career in journalism in 1979 on the Daily Telegraph and between 1984 and 1989 was appointed Editor of the Spectator magazine.

At the present time Charles Moore is working on the authorised biography of Baroness Thatcher.

Charles Moore is married to Caroline Baxter and they have a twin son and daughter.