Mr Hernando de Soto
Doctor of Letters of the University 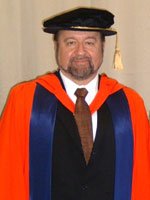 Hernando de Soto was born in Peru but at the age of seven he moved with his parents to Europe. He was educated in Switzerland and, after graduating from the Graduate Institute of International Studies in Geneva, he worked as an economist and business executive. As a professional economist he has served several international institutions including the General Agreement on Tariffs and Trade and the Copper Exporting Countries Organisation. As a businessman he became Managing Director of the Universal Engineering Corporation. It was not until 1980, thirty years after he had left, that he returned to work in Peru, and his experiences of adjusting to the conditions that he found there were to have a profound impact not only on him personally but on his country and on the wider world.

Hernando de Soto has played a leading part in encouraging changes in the framework of law in Peru that have recognised the property claims of thousands of people who had hitherto operated in the ‘extra-legal’ sector. These changes have transformed the lives of many poor people and greatly improved the rate of economic development of Peru. Around the globe, policy-makers in other countries are taking note of Hernando de Soto’s work and are introducing similar reforms with the help of the Institute for Liberty and Democracy.

Mr Lawrie Drury
Doctor of Science of the University 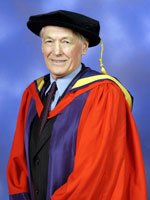 Lawrie Drury was born in Gloucester in June 1939 and was educated locally before attending Wycliffe College between 1947 and 1958. He gained a place at St Johns College Cambridge graduating in 1961. During his time at Cambridge he represented the University at rugby and athletics and the College at rugby, athletics, cricket and badminton. From 1958 to 1966 he played rugby for the Bedford RUFC and the East Midlands and in December 1963 played against the New Zealand All Blacks.

He joined Grant Thornton, chartered accountants, in Bedford in 1961 and after qualifying moved to Arthur Andersen in their London Taxation department. After two and a half years in the city he moved to Thomson McLintock, now KPMG, in Bristol, to run a corporate tax department, and then in 1972 became Principal of Reed Business. In 1989 he was asked to run a taxation course at Buckingham in the summer term. After two years of freelance lecturing in accounting and taxation courses for the big five accounting firms in eastern Europe he came on to the full time staff at Buckingham in 1992.

He has been married to Liz for 40 years and they have two married children, Rachel and Rob.

Mr Oleg Gordievsky
Doctor of Letters of the University 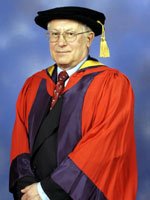 Oleg Gordievsky was born in Moscow in 1938. He attended the Moscow State Institute of International Relations, and was then posted to East Berlin, arriving just days before the Berlin Wall went up in August 1961. In 1962 he joined the KGB, and went on to serve in Copenhagen and London. Mr Gordievsky was the highest ranking KGB officer ever to work for British Intelligence. From 1974 to 1985, he collaborated with the Secret Intelligence Service (MI6) in Copenhagen, then London. The value of his information to Western governments, and particularly to the British, cannot be overstated. He gave Western security organisations such clear insights into the minds and methods of the KGB and the Soviet Government that he has been credited with being one of those directly responsible for accelerating the
collapse of Communism. His reporting was used at the highest levels of Government, both in London and in Washington.

In May 1985 Mr Gordievsky was recalled from London to Moscow, where it became clear that he had fallen under suspicion. Shortly after his return, his wife and children were also recalled to Moscow, having been told that Mr Gordievsky required medical treatment in Moscow. It was obvious that Mr Gordievsky’s life was in extreme danger, and he spent the next two months planning his escape. This was successfully carried out – despite KGB surveillance – in July 1985. But sadly, Mr Gordievsky’s beloved family had to be left behind, and thus began six years of separation, which only ended after the failed anti-democratic coup of August 1991. Following his escape, Mr Gordievsky was sentenced to death by the Soviet
authorities.

Now a British national, Mr Gordievsky has co-authored with Professor Christopher Andrew of Cambridge University, a number of authoritative and unique books examining the actual practice – as opposed to the theory – of Soviet intelligence. He remains a valued commentator on political developments in Russia, contributing to many current affairs publications.

The Honorable Pravind Jugnauth
Doctor of Laws of the University

Pravind Kumar Jugnauth was born in December 1961 and 21 years later arrived at The University of Buckingham to read for his degree in Law. He then went on to study at Lincoln’s Inn and was called to
the Bar in 1985. A Masters Degree followed in 1986 from Aix-en-Provence University in France.

After returning to Mauritius in 1987 he joined the Mouvement Socialiste Militant and in 1996 was appointed Councillor for the Municipality of Vacoas / Phoenix. In 1999 Minister Jugnauth was nominated Deputy Leader of the MSM and the following year was elected Member of the National Assembly for Constituency No 11 (Rose-Belle / Vieux Grand Port) and appointed Minister of Agriculture, Food Technology and Natural Resources. His rapid rise through Government continued when he was appointed Deputy Prime Minister and Minister of Finance and Economic Development in December 2003.

His many reforms during his time in Government include the initiation of the Sugar Sector Strategic Plan followed by the Sugar Industry Efficiency Act in 2001.

He has also been active in promoting the Voluntary Retirement Scheme whereby workers were given the option to retire prematurely and some 8,000 people have opted for the VRS. 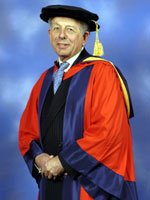 After graduating from St John’s College, Oxford, Robert Tomkinson qualified as a Chartered Accountant. During his nine years at Peat, Marwick Mitchell & Co his key roles included advising on the problems of a number of African airlines and setting up and running the North Sea oil and gas department. On leaving there he formed, with two friends, a small merchant bank specialising in the energy industries whose biggest achievement was obtaining the licence for and developing a major open cast coal mine in Australia. He then joined Automotive Products as Financial Director and was responsible with others for turning this company around. His final move was to Electrocomponents as Group Financial Director. The company is the worldwide leader in the high service distribution of electronic components. During his eleven years there the company grew from a market capitalisation of £300m to over £2 billion mainly by organic growth as it expanded from the UK across the world. On his retirement he took up a number of non-executive appointments across the world including the Chairmanship of the Council of The University of Buckingham from which he will retire in March 2005 after seven years. He is married to Joanna with two grown up sons.

Mr Guy Weston
Doctor of Laws of the University 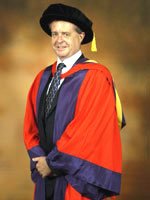 Guy Weston was educated at Westminster School and at Merton College Oxford. He then read for the Bar at the Inns of Court Law School and went on to take an MBA at the Institut Europeen d’Administration des Affaires. Mr Weston has since held various positions both within Associated British Foods and in other companies. He has been Managing Director of Jackson’s of Piccadilly and of The Ryvita Company and Chairman of Whittington Investments and of Heal’s.