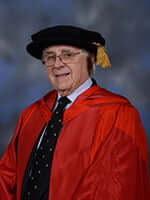 Born in 1942, Mawrey was educated at Rossall and Magdalen College Oxford, taking a first in Law and winning the Eldon Law Scholarship. Called to the Bar in 1964 he has practised as a Barrister in London since 1965, talking silk in 1986. After a general practice at the Bar, in the latter years Mawrey has specialised in consumer law and IT litigation. He has had a long career as a part-time Judge, having been appointed a Crown Court Recorder in 1981 and a deputy High Court Judge in 1995. Mawrey is best known, however, as an Election Judge, trying cases involving serious electoral malpractice in Birmingham, Slough and Tower Hamlets in one of which he notoriously said the frauds involved would ‘disgrace a banana republic’. He is also the author or editor of several standard law books. Mawrey is a founder and trustee of the heritage charity Historic Gardens Foundation.