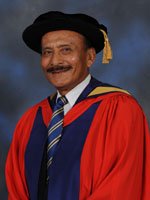 Tun Mohammed Hanif was Inspector-General of the Malaysian Police for 10 years before going on to study Law at The University of Buckingham in 1984. He graduated with an LLB (Hons) degree in 1986.

Throughout his career Tun Hanif successfully dealt with a number of serious security incidences. Between 1989-1990 he guided the Malaysian government towards achieving a lasting peace settlement with the Communist Party of Malaya (CPM) and the Sarawak Communist Organisation (SCO), ending 40 years of armed insurgencies.

In the mid 1970s Tun Hanif co-founded theAsean Police Chiefs Conference. During the 1990s he was active in Interpol and the UN Crime Prevention Commission.

Tun Hanif has received honorary awards from Malaysia, Indonesia, Thailand, Singapore, Brunei and the Philippines for his invaluable contribution to regional security, and in 1993 was given his country’s highest award which carries the titleship of ‘Tun’.

Tun Hanif was in the 2005 Royal Commission for the Enhancement of the Operations and Management of the Royal Malaysia Police. He is President of the Malaysian Institute of Management (MIM) andMalaysian Branch of the Royal Asiatic Society (MBRAS). He was awarded an Honorary LLD by the National University of Malaya in 1992 and an Honorary PhD by the Defense University of Malaysia in 2011. 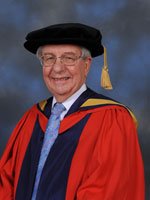 Professor Philip James trained in science and medicine at University College London and did his postgraduate training in the UK, Jamaica (Medical Research Council) and in the US (Harvard).

On his return to the UK he worked as a Senior Lecturer at the London School of Hygiene and Tropical Medicine, before going on to establish the Clinical Nutrition Centre at the Medical Research Council Dunn Nutrition Laboratory in Cambridge.

From 1982 to1999 Professor James was Director of the Rowett Research Institute in Aberdeen and was elected to Fellowship of the Royal Society of Edinburgh (FRSE) in 1986.

Professor Philip James was made a Commander of the British Empire in 1993.

In 1999 Professor James returned to the London School of Hygiene with his newly established International Obesity Task Force. His research career started with the development of new approaches to treating malnourished children, before developing the current scientific approaches to assessing individual and national food and energy needs.

Together with the World Health Organisation, Professor James introduced criteria, goals and preventive strategies for tackling the current global epidemic of obesity and chronic disease both in the UK and globally. He is currently President of the International Association for the Study of Obesity. 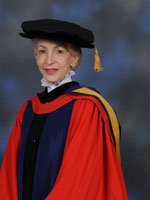 Lady Judge, a trained commercial lawyer with both British and American citizenship, has a broad and successful international career as a senior executive, chairman and non-executive director in both the private and public sectors.

She received a BA from the University of Pennsylvania and Juris Doctor with honours from New York University Law School and was a partner in a major US Law firm specialising in corporate and financial transactions.

Lady Judge is a member of the UK Nuclear Development Forum and Chairman of The Energy Institute of University College London.

In June 2010 she was made a Commander of the British Empire in the Queen’s Birthday Honours for service to the nuclear and financial services industries.

In November 2010 Lady Judge was appointed by the Prime Minister as a Business Ambassador for the UK. 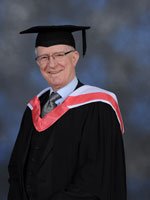 Tom Merrick graduated from Oxford University with a degree in Engineering Science and qualified as a Chartered Civil Engineer with John Laing Construction. He worked on a number of contracts including land reclamation and motorways and became the project manager on the Littlebrook power station site.

In 1982 Mr Merrick came to Buckingham as the University’s first Estates Bursar to direct the capital development programme which involved the establishment of strategic plans, the acquisition of land and property, the disposal of the Page Hill housing, the building of the new residential blocks, the Clore Laboratory and the Anthony de Rothschild Building. He also worked on the fashioning of the campus sites and the acquisition and development of the Gawcott playing fields, as well as the refurbishment of the Franciscan Building, many of the Hunter Street properties and the Chandos Road Buildings (though two phases of this scheme remain to be completed).

For his success in developing ‘town-gown’ links and joint projects, on his retirement Mr Merrick was honoured by the Town Council by being appointed a Friend of Buckingham.