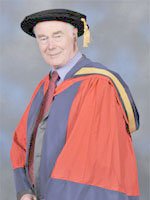 Martin Evans gained his BA in Biochemistry from Christ College, University of Cambridge, in 1963, his MA in 1966 and a DSc in 1996. In 1969 he was awarded a PhD from University College, London. He became Professor of Mammalian Genetics at Cardiff University in 1999.

Sir Martin was the first scientist to identify embryonic stem cells. His discoveries are now being applied in virtually all areas of biomedicine. In recent years Sir Martin has carried out pioneering work to develop therapy for cystic fibrosis and for human breast cancer.

Among his many awards was the 2001 Albert Lasker Award for Basic Medical Research in the US. In 2004, he was knighted for his services to medical science. The Independent newspaper named him as one of “10 Britons who changed our world.”

In October 2007 Sir Martin, along with two US-based scientists, was awarded the Nobel Prize in Physiology or Medicine for “a series of ground-breaking discoveries concerning embryonic stem cells and DNA recombination in mammals.” The Nobel Assembly said of the work: “Its impact on the understanding of gene function and its benefits to mankind will continue to increase over many years to come.” 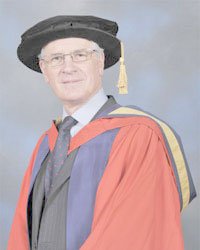 John Brigstocke was educated at Marlborough College and Britannia Royal Naval College, Dartmouth, and joined the Royal Navy in 1962.

He is a former 2nd Sea Lord and a member of the Admiralty Board. During his 38 years in the Royal Navy Sir John commanded four ships including the aircraft carrier HMS Ark Royal, and was also Captain of the Britannia Royal Naval College, Dartmouth. His seagoing commands as an admiral included Flag Officer Second Flotilla, Commander United Kingdom Task Group and Flag Officer Surface Flotilla. Ashore, he served as the Assistant Chief of Naval Staff, Admiral President of the Royal Naval College Greenwich and Commander-in-Chief Naval Home Command.

On retiring from the Navy, Sir John moved into healthcare and is presently Chairman of NHS East Midlands responsible for the commissioning of all services in the region and the performance management of 23 Acute, Primary Care and Mental Health Trusts. In January 2006 he was appointed as the first Judicial Appointments and Conduct Ombudsman. He was Chairman of Council at the University between 2005 – 2008.

John Brigstocke was knighted in 1997 and for three years was Flag ADC to Her Majesty The Queen. Sir John is also a Freeman of the City of London. 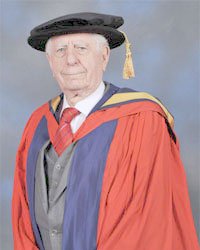 Sydney Kentridge was born in Johannesburg in 1922. At the end of 1941 he took his BA at the University of Witwatersrand. After four years of war service with the South African forces, he went to Exeter College, Oxford and took First Class Honours in Jurisprudence.

In 1949 he began practice as an advocate in Johannesburg. He was appointed SC (Senior Counsel) in 1965 and frequently appeared for leaders of the anti-apartheid movement. His clients included Nelson Mandela and Archbishop Desmond Tutu.

Sir Sydney Kentridge was called to the English Bar in 1977 and has since practised as a barrister in England. In 1984 he became a Queen’s Counsel and in 1999 was appointed KCMG by the Queen. In 2008 he was awarded the Order of the Baobab (Gold) by the President of South Africa. 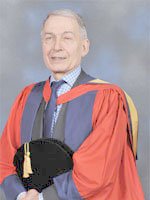 Frank Field was born in London and educated at St Clement Danes Holborn Estate Boys Grammar School before studying Economics at the University of Hull. In his youth he was a member of the Conservative Party and was elected as a councillor in the London Borough of Hounslow in 1964. In the same year he became a further education teacher in Southwark and Hammersmith and between 1969 and 1979 was the Director of the Child Poverty Action Group, and between 1974 and 1980 was Director of the Low Pay Unit.

Frank Field has been the Labour Member of Parliament for Birkenhead since 1979.

In 1983 Mr Field was appointed as a spokesman on Health and Social Security and then Chairman of the Social Services Select Committee in 1987. Following the 1997 election, Mr Field joined the Government as the Minister of Welfare Reform at the Department of Social Security with the rank of Minister of State. He became a Privy Councillor in 1997.

The Rt Hon Frank Field resigned from his ministerial position in 1998 and since the 2005 General Election has remained on the backbenches.