The Right Honourable Dame Elizabeth Butler-Sloss, GBE
Doctor of Laws of the University 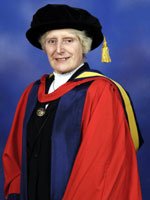 The Right Honourable Dame Elizabeth Butler-Sloss, GBE, was born on 10 August 1933 and educated at Wycombe Abbey School. She is the daughter of the judge Sir Cecil Havers and sister of the late Lord Chancellor, Michael Havers.

In 1987 she chaired the Cleveland Child Abuse Inquiry which resulted in the Children Act 1989, incorporating many of her recommendations. Dame Elizabeth was the first woman to hold the position of President of the Family Division from 1999 to 2005 and she was, by then, the highest ranking woman judge in the United Kingdom.

Dame Elizabeth has many other titles and responsibilities. She is an Honorary Fellow and Visitor to St Hilda’s College, Oxford; a Fellow of King’s College London; Chairman to the Advisory Council of St Paul’s Cathedral; Chairman to the Commission for the appointment of the Archbishop of Canterbury and President of the Commonwealth & English Bar Association. She also holds a number of honorary degrees and has been Chancellor of the University of the West of England since 1993.

In 1959 she married Joseph Butler-Sloss and has two sons, one daughter and six grandchildren.

Dame Elizabeth was awarded a DBE in 1979; appointed Privy Counsellor in 1988 and was raised to the rank of Dame Grand Cross of the Order of the British Empire in the New Year’s Honours List in December, 2004.