The Lord Browne of Madingley
Doctor of Science of the University 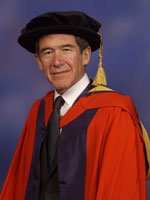 The Lord Browne of Madingley was born in 1948 and holds degrees in Physics from Cambridge University and an MS in Business from Stanford University, California.

He joined the British Petroleum Company plc in 1966 as a university apprentice and between 1969 and 1983 he held a variety of exploration and production posts around the world. In 1984 he became Group Treasurer and Chief Executive of BP Finance International. Two years later he was appointed Executive Vice President and Chief Financial Officer of the Standard Oil Company in Cleveland, Ohio and a year later, following the BP / Standard merger, he took on the added position of Chief Executive Officer of Standard Oil Production Company.

Lord Browne is currently a non-executive director of the Intel Corporation, Goldman Sachs, and a trustee of The British Museum as well as being a member of the Chairman’s Council of Daimler Chrysler.

Apart from his business interests, Lord Browne also holds posts as Chairman of the International Advisory Board of the School of Economics and Management, Tsinghua University; of the Judge Institute Advisory Board and Chairman, and Trustee, of the Cambridge University Foundation. He is also a member of the Guild of Cambridge Benefactors and Emeritus Chairman of the Advisory Board of the Stanford Graduate School of Business. He is an honorary Trustee of the Chicago Symphony Orchestra, and Vice President of the Prince of Wales Business Leaders Forum. These are but a few of the many positions he has, and does, hold.

In 1999, the Royal Academy of Engineering awarded him the Prince Philip Medal for his outstanding contribution to the field of Engineering and the Stanford Business School Alumni Association presented him with the Ernest C Arbuckle Award in 2001, in recognition of excellence in the field of management leadership.

Other awards include the Henry Shaw Medal of the Missouri Botanical Gardens, and the Gold Medal of the Institute of Management, The Society of Petroleum Engineers Public Service Award (2002). He was also voted Most Admired CEO by Management Today from 1999 – 2002.

He has been awarded a number of Honorary Doctorates, Fellowships and Honorary Fellowships. In 1998 he was knighted and made a life peer in 2001. 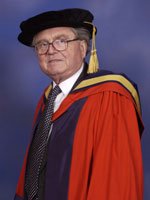 Graham Greene was born in 1936 and educated at Eton and Oxford. After a short time in banking in Dublin, New York and London he joined the publishing house of Secker and Warburg in 1958. In 1962 he moved to Jonathan Cape as a director, becoming Managing Director in 1966. In 1969 Greene laid the foundation of what was to become the well-known group of literary publishing houses, Chatto, Virago, Bodley Head and Jonathan Cape Ltd of which he was Chairman from 1970 – 88.

Graham Greene has also served on the British Council Board (1970 – 88), as a Chairman of the Great Britain-China Centre (1986 – 97) and Vice President since 1997, Chairman of Museums and Galleries Commission (1991 – 96), Chairman of the Trustees of the British Museum (1996 – 2002) having been a Trustee since 1978. He currently serves on the Board of Garsington Opera Ltd and of the Sainsbury Institute for the Study of Japanese Arts and Culture, University of East Anglia. 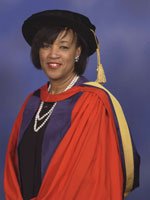 Baroness Scotland graduated with LLB Hons (London) and was called to the Bar in 1977 receiving silk in 1991. She is also a member of the Bar of Antigua and the Commonwealth of Dominica. She was appointed a Recorder in 2000 and approved to sit as Deputy High Court Judge of the Family Division. She married in 1995 and has two sons.

She was a founder member and former Head of Chambers at 1 Gray’s Inn Square and has specialised in family and public law and chaired and represented parties in a number of Inquiries relating to Child Abuse, Mental Health and Housing. She was voted Black Woman of the Year (Law) 1992.

She was Parliamentary Under-Secretary of State at the Foreign and Commonwealth Office until 2001 and Parliamentary Secretary at the Lord Chancellor’s Department from 2001 to 2003.

Baroness Scotland is also a former member of many legal, and other, committees, including: the Bar Public Relations committee; Race Relations Committee; House of Commons Working Party on Child Abduction and the National Advisory Committee on Mentally Disordered Offenders. In addition, she was formerly one of Her Majesty’s Commissioners for Racial Equality and a former Honorary President of the Trinity Hall Law Society. Her overseas positions include, Chairman of HMG Caribbean Advisory Group as well as the Dominican Representative of the Council of The British Commonwealth Ex-Service League.

Baroness Scotland was created a peer as Baroness Scotland of Asthal, of Asthal in the County of Oxfordshire, in 1997 and was raised to the Privy Council in July 2001. She became Home Office Minister of State for the Criminal Justice System and Law Reform in June 2003 and is spokesperson for the DTI on Women and Equality Issues in the House of Lords. She is also deputy to Peter Hain (Foreign Office Minister) on the Convention of Europe as well as Cabinet Office Spokesperson on Gender and Equality Issues.

She is an Honorary Fellow of the Society for Advanced Legal Studies, as well as both Cambridge and Cardiff Universities. Baroness Scotland is Patron of various institutions, among them the Margaret Beaufort Institute and the Frank Longford Charitable Trust. She is also a member of the Thomas More Society and the Lawyer’s Christian Fellowship.

Dr Stephen Bolsin
Doctor of Letters of the University 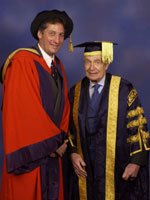 Dr Stephen Bolsin was born on 15 December, 1952 and was educated at the University of London, Faculty of Clinical Sciences and at UCH Medical School. He also has a Masters Degree in Health Care Management (MHCM) from Monash University and is a Fellow of the Royal College of Anaesthetists London (1982) and a Fellow of the Australian and New Zealand College of Anaesthetists.

Between 1988-1999 Dr Bolsin worked as a consultant anaesthetist at the Bristol Royal Infirmary in the UK. He was responsible for identifying and changing the paediatric cardiac surgery service that was associated with a very high mortality in that hospital. He left the practice in the UK after his involvement in the Bristol Royal Infirmary Paediatric Cardiac Surgery Affair and was involved
in the subsequent General Medical Council and Public Inquiries. The Bristol inquiries, especially the findings of Professor Ian Kennedy, after the longest public inquiry into the NHS since its inception have changed the organisation and attitudes of the NHS irrevocably.

Dr Bolsin was the first National Audit coordinator of the Association of Cardiothoracic Anaesthetists of Great Britain and Ireland. He believes audit should be a tool for continuous quality improvement and explicit patient benefit.

Dr Bolsin is now the Director of the Division of Perioperative Medicine, Anaesthesia & Pain Management at the Geelong Hospital in Victoria, Australia. He has been working in Australia for 6 years and has enjoyed sharing with his colleagues the challenges of setting up a new cardiac surgery service, a transoesophageal echocardiography facility, an efficient perioperative service and acute and chronic pain management services in the Department at Geelong Hospital.