Mr Denis Burrell
Doctor of Science of the University 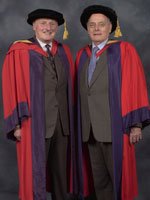 Denis Burrell was educated at Rugby School and Clare College Cambridge, where he graduated with a first class honours degree in Mechanical Sciences.

His first job was as a Stress Engineer working on Ejection Seats at Martin-Baker Aircraft Company, Denham. He left after two years to build and establish two manufacturing plants on ‘greenfield’ sites and managed them for seven years. In 1961 he rejoined Martin-Baker as Assistant Managing Director, primarily responsible for manufacturing, at a time when the Company was developing new products and expending into export markets. In 1981 he was appointed Chairman and Managing Director. In 1986 he relinquished his appointment as Managing Director and remained Chairman.

Denis Burrell was elected a Fellow of the Royal Aeronautical Society in 1981 and an Honorary Fellow in 1999. He is a Chartered Engineer and holds an honorary doctorate from Brunel University, and is also a member of the Court of Cranfield University. In 1982 he was appointed CBE for Services to Export. He is a Deputy Lieutenant for Buckinghamshire and was High Sheriff of Buckinghamshire in 1997/8. He is a Liveryman and Past Master of the Coachmakers and Coach Harness Makers Company of London, and a Liveryman of the Guild of Air Pilots and Navigators.

Denis Burrell lives at Denham in Buckinghamshire with his wife and son. 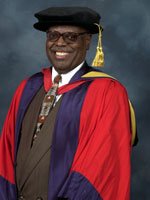 Mr Mills, Associate Counsel at Trott & Duncan in Bermuda, is a former top civil servant and broadcaster. He joined the Civil Service in 1976 as Director of Public Relations and, just over five years later, he took study leave to read law at The University of Buckingham, graduating in 1984.

He was subsequently appointed Secretary to the Cabinet and Head of The Civil Service in June 1993, holding the position until 2000 when he retired from the Service and resumed practising law. He was the first Cabinet Secretary to oversee a change in government following general election of November 1998.

Leo Mills was awarded the CBE in the New Year’s Honours List in 2001 for his contributions to the community. A Justice of the Peace, Leo Mills is a Founding Member of the Commonwealth Association for Public Administration and Management (CAPAM) and served as Chairman of the Bermuda Methodist Synod between 1993 and 1995.

Leo Mills married the former Vera Scatliffe of Tortola in 1970 and they are the parents of 30 year old twin daughters and have two grandchildren.

Mr Tim Newell
Doctor of Laws of the University 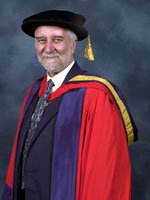 Tim Newell was educated at University College, Durham where he read History and then took a Diploma of Education after that (1960-65).

He worked for 37 years in the Prison Service in various roles and establishments. For the past ten years he has been governor of Grendon and Spring Hill prisons. Grendon is the national therapeutic community prison that has developed a unique regime offering therapy to the most dangerous of offenders. As a Quaker he has contributed to the involvement of Friends in criminal justice matters and gave the Swarthmore Lecture in 2000. From that event a book was published, ‘Forgiving Justice’ (Quaker Home Service). Tim Newell chairs the group that has introduced Circles of Support and Accountability into the UK with the help of the Home Office. These groups involve volunteers working with the high risk sex offenders on their release from prison and have a very successful outcome in integrating dangerous people into the community. He continues to work in justice matters through restorative justice processes involving victims, offenders and members of their communities in resolving conflict.

Dr Matt Ridley
Doctor of Science of the University 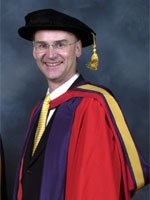 Dr Matt Ridley has BA and DPhil degrees from Oxford University in zoology and was science editor and American editor of the Economist between 1983 and 1992. He was a columnist for the Sunday and Daily Telegraph between 1993 and 2000. He is Chairman for the International Centre of Life, a £68 million science park and education project. He is also Deputy Chairman of Northern Rock plc, Chairman of Northern 2 VCT and a director of Northern Investors Company plc.

He is the author of the international best-seller ‘Genome’, as well as ‘The Origins of Virtue’, ‘The Red Queen’, and the forthcoming ‘Nature via Nurture’. His books have been translated into 23 languages and have been short-listed for six literary prizes.

He lives near Newcastle upon Tyne with his wife, the neuroscientist Anya Hurlbert, and their two children. 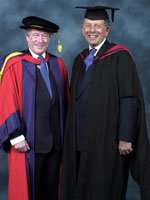 William Underwood was brought up in Nottinghamshire and educated at Oriel House, Wales and at Uppingham. Articled locally he went to London in 1961 as a Chartered Accountant with Deloittes. He joined Antony Cubbs & Sons, Merchants and Bankers, in 1966 on corporate finance and banking. After takeover by HSBC he moved in 1982 as Head of Banking to Norwich Union subsidiary AP Bank. In 1988 he joined Majedie Investments as Managing Director and subsequently Deputy Chairman. He retired in 2001.

At various times in his career William Underwood was a member of the Committee of London Chartered Accountants; the Council of the London Chamber of Commerce, the Vice-Chairman of its Education Committee; and a non-executive director of several unquoted companies. He is a Freeman of the City of London and a Liveryman.

After moving to Buckingham in 1968 William Underwood has been much involved in the local community. Since his retirement he has become Chairman of the Royal United Kingdom Beneficent Association (Rukba), a Charity which assists over 6000 elderly people with regular financial and pastoral help toward remaining in their own homes. He is also a trustee of other charitable trusts and he retains two non-executive directorships.

He was Chairman of the Finance and General Purposes Committee of the University from 1998 – 2002. He is a member of the Council, and sub-committees including the Audit Committee and a Trustee of the recently formed Foundation of The University of Buckingham.

Lady Odile Slynn
Master of Arts of the University 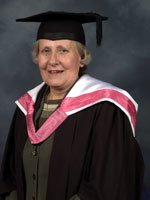 Odile Slynn was born in Paris, France and was educated at the Université de la Sorbonne in Paris before moving to England to study for her PMGS and SRN at Hammersmith Hospital London in 1959.

In 1962 she married Gordon Slynn (now Lord Slynn of Hadley) and since then she has been involved with many voluntary organisations. She has been a Member of the Board of Visitors for HMP Grendon / Springhill between 1981-97, as well as a Member of the Parole Board (1988-1992) and Chairman of its Awarding Committee from 1999. Odile Slynn has also been involved with the Society for the Protection of Animals Abroad (SPANA) since 1979. During her time as Chairman of the Society she was instrumental in launching three new branches in Jordan, Syria and Mali and a relaunch of Tunisia.

Lady Slynn taught French at The University of Buckingham from 1980 until she retired in 2000. Since 2000 Lady Slynn has been Assistant to Commissioner Youth for the Order of St Johan and a Member and Honorary Secretary to the British Moroccan Society since 1985.

Lady Slynn’s hobbies include travelling (especially to India where she is involved with various NGOs dealing with children and wildlife) as well as gardening and looking after her 3 dogs and 4 donkeys.

Sir Christopher Ondaatje
Doctor of Letters of the University 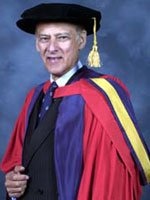 Christopher Ondaatje was born in Kandy, Sri Lanka in 1933 and educated at St Thomas’ College (Ceylon) and at Blundell’s School, Tiverton before graduating from the London School of Economics in 1953.

He started work at National and Grindlays Bank in London, before moving to Toronto, Canada in 1955 to work for Burns, Bros, & Denton. He then spent 14 years working in the publishing field before setting up his own companies. In 1967 he founded the Pagurian Press (later to become the Pagurian Corporation Limited) and in 1970 Loewen, Ondaatje, McCutcheon & Co Ltd, the first independent research-based institutional equity firm in Canada.

Sir Christopher’s love of literature led him not only to start the Pagurian Press but to write eight books ranging from The Prime Ministers of Canada (1867-1967) to Journey to the Source of the Nile.

In 1964 he was a member of Canada’s Olympic Bob-Sled Team. Christopher Ondaatje is a philanthropist whose many donations have helped the arts and education in Canada and the UK. In 2000 he was awarded the Order of the British Empire (CBE) in the Queen’s birthday honours list. He married Valda Bulins in 1959 and they have three children.