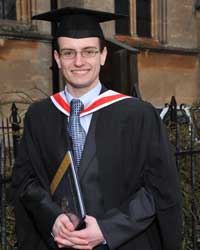 Daniel Pilbeam, 21, who has won this year’s Edgar Palamountain Award for Excellence, did not set out to become top of the class. “It was really just doing as well as I could,” he says modestly. “I didn’t aim to get what I did. I put my head down and what I got is what I earnt.”

A law student, Daniel has not only come out with the University’s top prize instituted in memory of Edgar Palamountain, Chairman of Council at Buckingham from 1979 to 1984. He was also awarded a First Class degree and the prize for A Good Performance in the Part II Examination and the Roderick Wu Prize for the Best Performance in Law of Evidence. The Palamountain Award is given every year to the undergraduate who is judged “first among equals”.

Daniel was fortunate in that he enjoyed studying law. “It was hard work and it was tough, but if you enjoy it, it’s not a problem”, he says.

It helped that he studied the subject at A-level, which meant that he knew what to expect when he arrived in Buckingham. He chose the University for two reasons: the two-year degree and Buckingham’s small size. “The University was much smaller than the others I visited, much more close-knit and much friendlier.”

He believes that the two-year degree is Buckingham’s strong suit. “It’s nice to get your degree over and done with”, says Daniel. “The big advantage is that you don’t forget everything in those long summer breaks.” Moreover, Daniel believes he was well taught – and was thrilled that the lecturers gave him help when he needed it.

He is now looking for a company to give him a legal training contract because he wants to be a solicitor rather than a barrister. And he is interested in working in and around London in crime and contract law. We wish him every success in his job-hunting efforts. 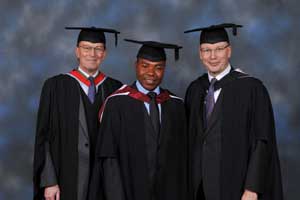 At first, Abdallah Ibrahim, who won The Dame Barbara Shenfield Award, did not think he would be able to travel to Buckingham to collect his prize, a solid gold medal. The winner of a Commonwealth Scholarship, he had financial help to cover both his tuition fees and living costs while studying last year for a Master’s degree in Service Management and did not have the money to return to Britain from Ghana for Graduation.

But then he discovered that he had won the award made annually to the postgraduate who is judged to have achieved the best overall performance of the year – and the Business School moved heaven and earth to fund his flight. Abdallah was able to renew his visa and fly back to receive it at February’s Graduation from Dame Barbara’s sons, Peter Lewis and Martin Shenfield.

Afterwards Dame Barbara’s sons announced that they would shoulder the cost of Abdallah’s return flight back to the Graduation ceremony, for which the University is deeply grateful.

Currently unemployed, Abdallah is enthusiastic about Buckingham’s MSc in Service Management taught and run by Deba Bardham-Correia. “The course is very tough and very interesting”, he says. “I put my all into it and I am happy I am recognised for this work.”

Now he is hoping to secure a job in the private sector in Ghana. After that he would like to study for a PhD. 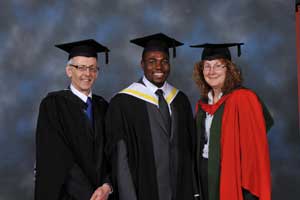 Kroma Wenike-Briggs, 21, who won The University Prize for Academic Distinction, says that he prayed a lot during his studies. His prayers were answered. Not only did Kroma achieve a First Class degree in Accounting but he also won two prizes in the Business School – the award for The Best Performance in the Part II Examination and The John Wheeler Prize for the Best Graduating Student.

“I did work hard,” says Kroma who comes from Nigeria. “I felt sometimes that the work was a bit too much, but anything you couldn’t understand you could ask your peers – or you could go to your tutors for help.”

Kroma did A-levels in maths, economics and politics at Abingdon, the independent school near Oxford. He says that his experience at Buckingham taught him how to organise his time. Every day he did his academic work and went to the gym for at least an hour – and he enjoyed an energetic social life. He also learnt how to teach his peers the concepts that he had mastered.

His plan now is to return to Nigeria to get a job. Then he intends to come back to Britain to do a law degree. “I plan on going into business and it would be very useful to be a lawyer,” he says. “It means you know how the system works. There will be contracts to sign and deals to be done.”