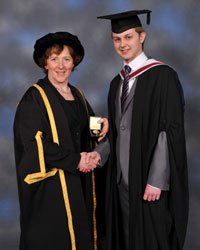 “I am extremely honoured to have been awarded this prestigious prize. I never dreamed that I would be considered to be ‘first amongst equals’ when I started my course in January 2008.

The Graduation Ceremony was a very proud moment for me, as it was the culmination of two years of studying and hard work. Being presented with the Edgar Palamountain Award for Excellence served as a special end to my time at Buckingham.” 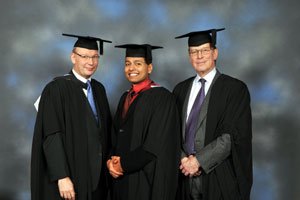 “The Dame Barbara Shenfield Medal is awarded to the postgraduate student who has achieved the best performance over the year. I am therefore both delighted and honoured to receive this prestigious award. This is truly the result of the excellent support and mentoring given to me by my supervisors, Dr Kenneth Langland and Dr Claire Stocker, and also the encouragement by the Clore directors, Professors Mike Cawthorne and Jon Arch. I have always found the Clore lab to provide an exceptionally intellectually stimulating environment especially through the efforts of Drs Jacqueline O’Dowd, Mohamed Zaibi, Ed Wargent and David Hislop. I would also like to thank my colleagues Maysson Ibrahim, Amgad Al-Habian and Malgosia Kepczynska, Anita Roberts and Julie Cakebread for helping me focus my ideas. During my studies investigating transcriptional profiling in a model of programmed metabolic disease using gene network and pathway mapping tools these exceptional people have been instrumental in my achievements. Along with being a world-class research facility, the Clore lab is focused towards individual student development. I am currently pursuing my DPhil at The University of Buckingham because, unlike other universities, this research facility at the Clore lab provides students with unprecedented support. I would highly recommend anyone interested in metabolic disease, specialising in obesity and type 2 diabetes to consider The University of Buckingham for higher education.”

School of Business (Criteria – achievement against the odds)

School of Humanities and Social Sciences (Criteria – all round achievement, and being an exemplary student)

School of Law (Criteria – all round achievement, and being an exemplary student)