Andy Green, the fastest man on the planet – full report 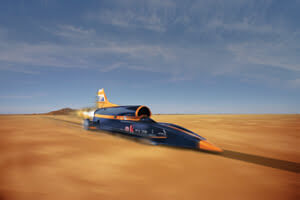 I remember visiting the Motor Show when I was a little boy and seeing a gold coloured car that was essentially a jet engine on wheels (Thrust 2) and subsequently hearing of the exploits of a British adventurer called Richard Noble driving it to 633 mph setting a world land speed record in 1983. That started my interest in Land Speed Records and in the mid 1990s when Richard Noble started working on a new car to go supersonic on land I took a keen interest. Rather than drive it himself, Richard chose RAF Fighter pilot Wing-commander Andy Green to be his driver, and whilst the Web was still in its relative infancy they published daily reports telling the world how they were getting on with ThrustSCC in the Black Rock Desert, Nevada and what they had achieved as each test run was completed. The excitement grew as their goal neared and whilst video was not available then a subsequent documentary on the BBC showed their massive achievement in cinematic glory (that documentary is now on YouTube and I would thoroughly recommend it if you have a spare hour and a half!)

Midway through 2011 I heard of Richard and Andy’s new challenge to build BloodhoundSSC and go even faster (1000 mph) so when I read in the Daily Email that Andy Green was coming to the University to give a talk I made sure I could attend!

Wing-commander Andy Green (1st class Mathematics graduate from Oxford) was a charismatic and highly intelligent speaker and gave us an interesting and witty tour through some of the history of the world land speed record showing video clips including the fastest crash in land speed history (Craig Breedlove in 1996 where his car Spirit of America flipped on its side at 675 mph, but thankfully it righted itself and Craig lived to try again). He then described the engineering process and the ground breaking Complex Fluid Dynamics (CFD) research undertaken by the University of Swansea that gave rise to ThrustSSC and his subsequent sound-barrier breaking drive on 15th October 1997 which set the current record of 763 mph (Mach 1.02), which Andy reckoned made Formula 1 seem very slow!

Fifteen years on and his new challenge is to tackle the shortage of scientists, engineers and mathematicians by enthusing the next generation of school children (and adults) about science, technology, engineering and mathematics (STEM) in the same way that the Apollo moon missions did in the 1960s. To do this the BloodhoundSSC team have set the goal of designing, building and driving a car that will safely travel at 1000 mph (Andy was particularly keen on the safety part) and with backing from the UK Government they are taking their education program to schools across the country (nearly 4000 schools signed up so far) to tell them about the project and getting students designing, making and testing models. All the research is being published including full car design specs and thanks to mobile technology they hope to broadcast video and telemetry of the car in real-time as they perform test runs on the Hakskeenpan in the Northern Cape Province of South Africa next summer. Andy highlighted that anyone can be a part of their journey by donating money for their name to be put on the tail fin, becoming a member of their supporters club or just getting local schools to sign up to the education programme.

I for one am looking forward to next summer and seeing BloodhoundSSC in action and I wish him every success.

Anthony Cole
Head of IT
University of Buckingham
27 July 2012