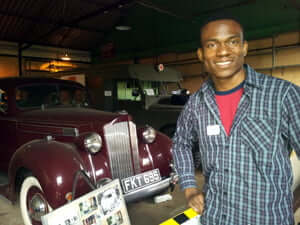 I like to visit museums to imagine what the world was like many years before and also to get a sense of how far the human race and its technologies have come. Bletchley Park didn’t disappoint on both counts.

They park was run by a friendly volunteer staff. They took a lot of effort to take us around the facility as chronologically accurate as they could manage. The exhibition began with a brief talk as to how Bletchley Park came about during World War 2, and the reason it was situated in Bletchley. The talk progressed to an introduction to the various attractions we were going to see. At the time I was taking a course on Information Security so I was very keen to see the code breaking and code generation main attractions.

First stop on the park, The Colossus. It was an enormous machine! This was a rebuilt version of the one designed to break the German Lorenz cipher that signified a breakthrough for the British forces during WW2. The knowledgeable tour guide made it all seem real. He recounted a story of how the Lorenz used by Hitler met its match and was broken as a result of careless repeat transmissions of the cipher message by the operator. Other Cipher machines like the Enigma and Bombe, created to decipher Enigma cipher, were also on display. I was surprised to find that not only German, US and British forces where in on this cryptographic technology at the time. Japanese and Chinese agencies also had their own adaptations. This particular museum in the park showcases a wealth of war era cipher technologies, including a sculpture of cipher genius Alan Turing and other relics of the WW2 era. I took loads of pictures!

We were also guided to see the evolution of modern day computers at the National Museum of Computing. Some of the computers here are almost 60 years old and still work! I saw the giant computers of the 40’s, like Colossus and slightly smaller, but still enormous, of the 50’s like the WITCH. I didn’t know analogue computers existed. I saw those and then the Analogue to digital converting computers used for seismic calculation too. There were other computers also on display, too many to list but it all trickled down to the Apple and regular PC’s children of this age would be used to. Cabinets of Mechanical calculators and its evolution to our modern day calculators were also on display. Earlier versions of mainframe computers, from the gigantic PDP of the 80’s to the smaller HP and IBM models of the 90’s were also on display. The highpoint of this section of the tour for me was having a go at programming a game instruction in BASIC at the TNMOC classroom. It was fun trying to build in cheat into the game when I could not beat the record time. Also in this room was a LEGO robot project, Raspberry Pi ensemble, and an early AI computer designed to be a “friend” by psychologists and a surface computer. I got to play with my first surface PC; I must say the guide in this room was very patient.
Around the park attractions didn’t disappoint, we saw the old mansion that was used to cast the illusion of an ordinary family cottage from the air. We also got a view of the lake and the old sheds that were built to house the growing number of workers at the Park in wartime. My delight was at the Garage though. World War 2 Ambulance, dispatch riders, Austins, vintage Rolls Royce of the War era was among the cars on display.

It was a well spent and exciting day. I had loads of fun chatting with the staff and learning from them. My friends and I took lots of pictures. I am so grateful that the Computing department arranged this visit on our behalf. I have gained valuable background knowledge that should make the information security course I am taking at the moment even more interesting!

I was sceptical before we left because although I’m sure you could spend the whole day in a museum you can’t be interested in everything. I was pleasantly surprised when we got there because it isn’t just a small but dedicated computing museum, it was a great big museum surrounded by other museums.

The people who led us on the tour were really knowledgeable and I liked the way the displays weren’t just displays. You could interact with most of the items and everything in the museum works, every single bit of it! Of course, having that many computers and other devices connected to the power supply every day would be wasteful so not all of it was on, but it was amazing to know that if you wanted it to see something in particular in action, they could just flip the switch.

Of course we had to go and see the rebuilt Turing Bombe machine which works, it’s much bigger than I thought it was. Close-to the Bombe was a wealth of information about Alan Turing, centred on a sculpture of him made of stacked slate shipped from North Wales. It was very detailed, down to the mug that’s chained to the desk highlighting his high work ethic. A section of the hall was dedicated to the events leading up to his suicide and the social ramifications of being homosexual in the 20th Century. There is a personally signed copy of the famous ‘Apology’ by Gordon Brown from 2009 and I was very moved when I read it and the other documents on display.

One thing that sticks in my memory very well is the wealth of Acorn computers. Not because they were particularly amazing, although they were very difficult to look at with their small, bright screens. The reason that I remember the Acorn so well is because we had the opportunity to copy a page of code from paper into the machine by hand in order to make a game that was a little ‘snake’ appear on the screen.

On the tables in that room they had all these old magazines that you used to be able to buy in shops and kids would copy out pages of code so that they could play games on their computer. It must have been very frustrating and time consuming, one comma in the wrong place and you’re done for. And you can’t use the backspace key; if you notice that you’ve got a bit wrong you have to copy out the whole line again!

Going back to the bright screens of the Acorn, there’s one set of displays that makes very good use of those colours. I don’t know what to call that display but there are lots of techni-colour 80s computer games set up on the screens and music that sounds like it’s from the one of the original Nintendo games by a group called ‘Pixelh8’. There’s a time-line of computer history which also shows world events and I was surprised at how the two time-lines tied together.

We also played with some newer technology, like the BBC Doomsday project with the touch screens. There were all these photos of my home town from 1986 and maps showing the changes to the landscape over the past 30 years.

I learned a lot about the history of computing today and the things I already knew have been put into context for me. I wouldn’t mind going back to the computing museum. Even though we were there for the whole day there was much more to see. And Bletchley Park in general has a lot of stuff going on.