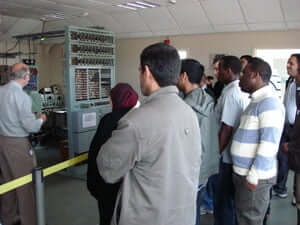 On 30 April, a group of Applied Computing students visited Bletchley Park, a historic site a few miles from Buckingham where secret messages, mostly high profile military information, were deciphered during the Second World War. Here is their report:

“It was an honour to have Dr Tony Sale talk to us about how messages were transmitted and received during World War 2. He also showed us how the Colossus works, thanks to the team that he led in rebuilding this computer, which proved that the first programmable computer was built in Britain.”

“A guided tour of the National Museum of Computing made us see how computers have evolved over the years in terms of speed, price, memory and many other factors.”

“Having had a wonderful educational trip, the students who were present would like to thank the Applied Computing Department for organising everything, Dr Ihsan Lami for accompanying them and the volunteers at Bletchley Park for making the visit so informative.”

Report by Sylvester Owino and the Web Team