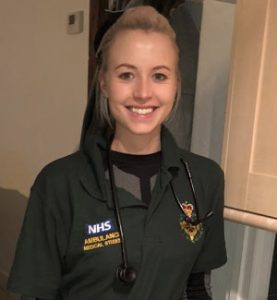 One of the appeals of the Buckingham Psychology Bsc was the 2 year course. Initially, I only applied as a means to an end. I knew that I wanted to study medicine and Buckingham was one of only very few universities that would accept students without A level Chemistry, as postgraduates who achieve a 2:1 or a 1st in a science-based degree. Having studied at Buckingham for the last 5 years I can safely say that this is not because they have lower standards than other universities or are lax in their entry requirements, it is that Buckingham see their students holistically and as more than a grade sheet. They take far more notice of the individual person, their potential and attitude.
So although Psychology started as a stepping stone to medicine, it quickly became far more than that to me and that is because of the way in which the course at Buckingham is managed and all of the incredible staff.

Due to family bereavements, I was unable to attend my first week of university. To this day I vividly remembering calling Jayne in the office to explain and dreading the hassle that this was going to cause. Within 30 seconds Jayne had told me not to worry, she would sort everything for me and to come back when I was ready. Although this particular example sticks with me, there are countless ways in which the whole admin team shone as not only genuinely kind people whose door was always open, but who also run the department like a well-oiled machine!

The lecturers are second to none in their enthusiasm, knowledge and talent for bringing out the best in their students. The small group tutorials were a personal highlight of the course as they allowed endlessly interesting academic debate and sharing of ideas with a complete absence of judgment that is unique to that style of learning. I think these sessions are so successful due to the atmosphere of mutual respect and inclusivity that is fostered throughout the department with all ideas, suggestions and theories being welcomed. This was also apparent when it came to conducting our own research towards the end of the course. I chose to investigate health seeking behaviours in the homeless population which also included sensitive issues such as past trauma and coping styles. From the outset I knew that conducting research into such complex topics with a vulnerable population was ambitious in terms of ethical approval but thanks to the amazing support of the supervisors it was approved at the first ethics committee review.

Gaining a first-class Psychology degree not only allowed me to get a place at medical school but it has been invaluable during the medical course. I credit psychology with giving me a much greater understanding of people’s attitudes to their health & healthcare, health related behaviours, psychiatry and mental health, as well how pain is perceived and the factors that can affect it. These are just a few specific examples of the overlap between psychology and medicine (there are far more!) but I think overall it was psychology that taught me that medicine is ultimately about people and medicine alone cannot teach you that in quite the same way. I entered medicine with a true appreciation for the importance of a holistic approach to the intricate and multifaceted factors which affect health and how people perceive and experience it. I truly believe that having studied psychology will make me a better doctor in the future.