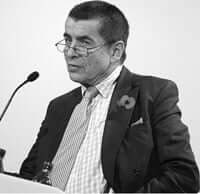 Sir Geoffrey Nice is one of the country’s most distinguished human rights lawyers. In addition to being a Bencher of Inner Temple, he is currently Gresham Professor of Law at Gresham College, London (a post which he will retain until 2015).

He was educated at Keble College, Oxford (Philosophy, Politics and Economics) and the College of Law, London. He was called to the Bar in 1971, and practised as a barrister until 1998 when he was recruited to the International Criminal Tribunal for the former Yugoslavia – ICTY – by Justice Louise Arbour (later UN High Commissioner for Human Rights). He prosecuted a number of cases relating to genocide, and in November 2001 undertook the prosecution of Slobodan Milošević until the end of that trial in 2006.

He serves as a Recorder (Civil, Criminal, Family cases), 1984 to date (sitting at Old Bailey since 1995); served as a Member of the Criminal Injuries Compensation Board (making awards of compensation for victims of crimes) 1995 – 2001; Deputy Chairman (the senior professional member) of the Bar Standards Board (regulatory body of the Bar of England and Wales) 2009 – 2012; served as a Board Member of Indict (an NGO for gathering evidence for the indictment of Saddam Hussein); a Board Member of the ‘Burma Justice Committee’, 2007 to date; a Commissioner of the Harvard Report into Burma, with Justice Richard Goldstone (South Africa) and Justice Patricia M. Wald (United States); Advisory Board Member of ‘Prisoners of Conscience’; Patron (and occasional lecturer) at the University of Kent at Canterbury; he is also actively involved in raising awareness of humanitarian crimes committed in North Korea, and has argued for an official UN Commission of Inquiry. Since the establishment of that enquiry in 2013, he has served as an adviser to the Commission.

He was appointed Honorary Doctor of Laws, University of Kent, 2005; and knighted in 2007 for services to International Criminal Justice.