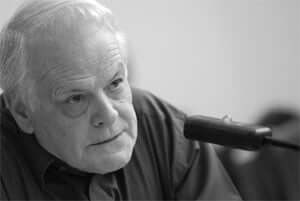 Sir Rodric Braithwaite was educated at Christ’s College, University of Cambridge, where he achieved First Class Honours in Modern Languages. He went on to serve in HM Diplomatic Service, with postings in Jakarta, Warsaw, Moscow, Rome, Brussels (British delegation to the European Community) and Washington.  Between 1984 and 1988 he served as a member of the Sherpa Team (preparing HM’s Government for the G7 Economic Summits), and from 1988-92 was HM Ambassador in Moscow.  Other appointments included Foreign Policy Adviser to the Prime Minister, the Rt Hon. [now Sir] John Major, and Chairman of the Joint Intelligence Committee.

He was appointed Knight Grand Cross of the Order of St Michael and St George (GCMG) in 1994.

He makes regular contributions to The Financial Times, The Guardian, The Observer, The Sunday Times, The New Statesman, Prospect Magazine, The Evening Standard, and Survival.