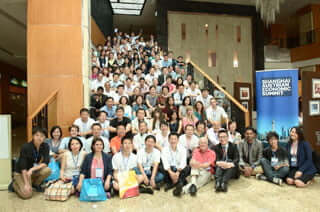 As he mobilised China with the Cultural Revolution, Chairman Mao did not want to create just a new political or economic system. He wanted to create a new mindset entirely. To realise these goals, both freedom of speech and the freedom to organise had to be completely eliminated.

For Chinese at the time, meeting with others publicly was entirely out of the question. Even within the walls of their own homes one had to be wary, as neighbours and even family members might report them to the Party leadership. My own grandfather was sentenced to over a year of hard labour simply for making a comment about Mao’s wife to one of his colleagues.

Walking through the streets of Shanghai today, it seems inconceivable that just 40 years ago the place was under the thumb of such an oppressive regime. Markets and capitalist activity are everywhere, businesses are started with ease, and buildings shoot up without years of urban planning procedures.

While on the surface, it seems that China has been completely transformed, deep down, the legacy of the Cultural Revolution lives on. Though the level of enforcement and the severity of the punishments have both declined, free speech and freedom to organise are still heavily restricted.

As a result, there is a tremendous hunger for new ideas, particularly greater understanding of this new market economy that they are experiencing today. Chinese have embraced and thrived with capitalism out of instinct, but not because they agree with or understand it. Thus, a number of entrepreneurs and students are currently seeking out the answer to the question of whether or not capitalism is moral.

Eager to provide them with the answer to this question, we hosted our first Shanghai Austrian Economic Summit in 2012. Given the restrictions on groups meeting, especially to discuss politics, we had to take great care to stay under the government radar.

In addition to selecting the title of “Austrian Economics” rather than “free-market economics”, we also played it safe by choosing a venue in Kunshan county, in the outskirts of Shanghai. There it was easily reachable by metro, but technically outside of Shanghai jurisdiction. Moreover, the venue itself was a Doubletree hotel, which provided a further level of protection by being an international company.

Setting up the event, as we found out, was the least of our challenges. Getting the word out without attracting state attention was the real obstacle.

All forms of Western social media are banned in the country, from Facebook and Twitter to YouTube. Even on the accessible Chinese social media sites, any politically sensitive keywords are thoroughly censored.

Making things even more difficult for us this year, a few months prior to the event, the state began cracking down on anything related to Google. Among other issues, this greatly disrupted our website, as any coding or links connected to Google were blocked entirely.

Nearly all the promotion of the event had to be done on WeChat, the most popular social network in China, which meant constant promotion through one chat group after another. Even when we would come across someone with thousands of followers who wanted to spread the word about our event on their profile, we had to assess if it was worth it, because we knew that the eyes of the state were on them.

Luke, one of our local organisers was reported to the police himself when he posted the event on his profile. All of the things that made things difficult for us, however, simply served as a reminder of why it was so important to organise such an event. That is, because the need is just so great.

In the end, all of our effort was worth it, as an incredible group of over 140 academics, entrepreneurs, students and professionals came together to hear about and discuss ideas of free-market economics. The majority of the audience was from China, but we had speakers and attendees from 13 other countries as well, including Tom Palmer (Atlas), Dan Mitchell (Cato), Kriengsak Chareonwongsak (Institute of Future Studies), Feng Xingyuan (Unirule Institute), Wang Ning (Ronald Coase Institute), and many more.

One of the most powerful talks given was from Yeonmi Park, who told the heartbreaking story of her escape from North Korea, and who is now working with Casey Lartigue at Freedom Factory in South Korea to help promote the North Korean cause.

Also notable amongst the speaker line up were two Buckingham alumni, June Arunga Kimani who spoke about Global Entrepreneurship and Jose Stelle who spoke about his book The China Lectures: Constitutional Reform in China, which will be released in Hong Kong this September.

Overall, it was an incredible, inspiring, and productive event.