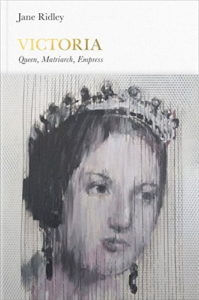 This book is part of the Penguin Monarchs series which provides short, fresh, expert accounts of England’s rulers.  Queen Victoria inherited the throne at 18 and went on to become the longest-reigning female monarch in history, at least until Elizabeth II overtakes her in September 2015.  She reigned in a time of intense industrial, cultural, political, scientific and military change within the United Kingdom and great imperial expansion outside of it (she was made Empress of India in 1876). Overturning the established picture of the dour old lady, this is a fresh and engaging portrait from one of our most talented royal biographers.  Professor Ridley found it a real challenge to distill  Victoria’s long and heavily documented reign into a book which was strictly limited to 30,000 words.

Jane Ridley is Professor of History at The University of Buckingham and director of the MA in Biography.