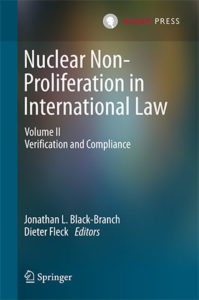 The lawfulness of a state’s recourse to the ‘nuclear option’ as a means of self-defence is still a discussion which sits uncomfortably amongst most scholars, partly, because the seminal advisory opinion on the Legality of the Threat or Use of Nuclear Weapons delivered by the International Court of Justice in 1996 remains shrouded in legal uncertainty and, perhaps more importantly, because the threshold needed to lawfully invoke the doctrine of self-defence is set so high, and rightly so. Only under exceptional circumstances would a state meet the cardinal requirements of ‘necessity’ and ‘proportionality’. The use of a nuclear weapon as a means of self-defence lies at the very edge of the spectrum. That is not to say that recourse to conventional weapons automatically fulfils the necessity and proportionality requirements.

Read more about the book on the Asser Press website.