Is this picture a ‘seed’ sent to Earth by aliens? Scientists discover mysterious organism 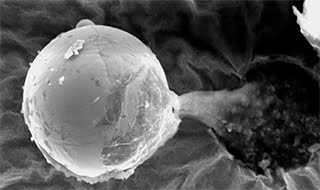 Professor Milton Wainwright and his team have found a microscopic metal globe in dust and particulate matter collected from the stratosphere. Professor Wainwright said the structure is made from the metals titanium and vanadium with a “gooey” biological liquid oozing from its centre.  He said there are several theories as to where it came from, the first being it is a complete microorganism programmed to propagate alien life on Earth.  “It is  a ball about the width of a human hair, which has filamentous life on the outside and a gooey biological material oozing from its centre,” he said.  Read the full article on the Express website.