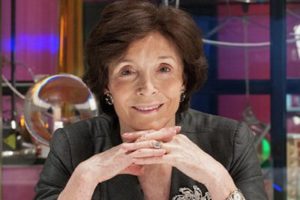 The University of Buckingham will appoint Dame Mary Archer as its new Chancellor, succeeding Lady Tessa Keswick who has been in the role since 2014, at a meeting of Convocation to be held on 24 February.

Dame Mary started her career as a physical chemist and taught chemistry at both Oxford and Cambridge Universities, where her research interests centred on sustainable energy production and solar energy conversion. She has written and contributed to various volumes of work concerning solar energy. She is a Companion of the Energy Institute and was awarded the Institute’s Melchett Medal in 2002 and the Eva Philbin Award of the Institute of Chemistry of Ireland in 2007.

Chair of Cambridge University Hospitals NHS Foundation Trust for ten years from 2002 to 2012, Dame Mary was appointed Dame Commander of the British Empire (DBE) for her services to the National Health Service. From 2005 to 2008 she led a pioneer NHS-funded initiative to create patient decision aids for patients with prostate conditions, and later she introduced an information and advice service for bladder cancer patients in Addenbrooke’s Hospital, and across the Anglia Cancer Network. She was a founder director of Cambridge University Health Partners and chaired Imperial College Health Partners External Advisory Board from 2013 to 2017. She currently chairs the Centre for Personalised Medicine at Oxford.

Dame Mary is a very distinguished Chair of the Science Museum Group and its allied museums. As well as being a Companion of the Energy Institute, she is the Patron of the National Energy Foundation and President of the UK Solar Energy Society. She is also an Honorary Liveryman of the Fuellers’ Company and an Honorary Member of the Salters’ Company and she holds honorary DSc degrees from Imperial College London and the Universities of Hertfordshire and Bradford.

Rory Tapner, Chair of Council, University of Buckingham comments: ‘Lady Tessa Keswick has provided us with great insights and support during her time as Chancellor. Working together, we have modernised our courses and student experience, and we hope to continue to build on the teaching excellence she has helped us cement. We’re excited to welcome Dame Mary to our University and believe she will help us further to propel our Schools, enhance our research programmes, and think more sustainably.’

In 2015, The University of Buckingham opened the UK’s first independent, not-for-profit medical school since the 1940s, and applications have continued to rise ever since, with a 38% increase this year for its undergraduate degree. The 4.5-year (GMC-accredited) MB ChB programme is designed to train highly ethical, honest and compassionate doctors who will put the patient first.

Vice-Chancellor, Sir Anthony Seldon, added, ‘The University has been blessed by a very distinguished series of Chancellors, including Lady Thatcher and most recently Lady Keswick.  Dame Mary’s work will prove particularly inspiring to our medical students, whom we always encourage to innovate in their field and adopt cutting edge approaches.’

Discussing her new appointment Dame Mary Archer said: ‘I have long admired the University for its pioneering and student-oriented approach, and I am deeply honoured to become its Chancellor as it expands its Medical School and other faculties and moves towards its landmark 50th anniversary.’