Buckingham’s Brownies take over the Department of Applied Computing

On Thursday 11 May the Department of Applied Computing  invited the Brownies of the Girlguiding Buckinghamshire group over to experience the exciting world of Computer Science. During their visit the girls, aged 7-10 years, learned the basics of programming concepts using Scratch; a free programming language and online community where you can create your own interactive stories, games, and animations. Probably the most exciting moment of the evening, however, was the chance to test the Department’s Virtual Reality and Augmented Reality headsets. The excitement and laughter the room was filled with was absolutely priceless! 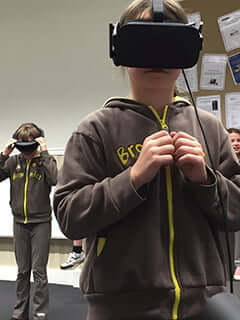 Girlguiding Buckinghamshire was thrilled to get the opportunity to introduce Computer Science to their Brownies. Not only did they plan to visit the University as a fun evening event but they also wanted to introduce them to STEM education. It is fantastic that Girlguiding Bucks take their members on educational trips to discover new programmes. It is never too early for anyone to start investing in their future. Because of its value, Girlguiding Bucks are looking into a science badge which can only be earned by attending events such as the Brownie event at the University of Buckingham. The university encourages such great ideas and it will definitely support similar events in the future. 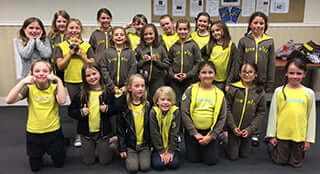 “This so awesome, I want to study computing!” one of the Brownies stated. The Department of Applied Computing is really excited to get such fantastic feedback. In fact, one of the Department’s objectives is to increase the number of female students to at least 30% by 2020. The undertaking is called ‘Project 30 Percent’ and is definitely one of the most challenging goals, given the fact that the IT sector is dominated by males. According to HESA data of 2015/2016, women made up just 17% of computer science students. The Department of Applied Computing, however, is definitely on its way to increase the percentage.

To find out more about the Project 30 Percent or any other activities of the Applied Computing Department, contact Dr Harin Sellahewa (Head of Department) or follow us on twitter @ub_computing.