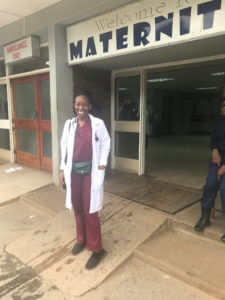 Bisi is a medical student from the University of Buckingham. She travelled to Lusaka in Zambia on a two-week medical elective to see the differences between healthcare in the UK and the developing world.

During my placement I was based in the largest teaching hospital in Lusaka, Zambia. It contained approximately 1,600 inpatient beds. The hospital provided services similar to those found in district general hospitals in the UK, such as accident & emergency, maternity and paediatrics. In addition to this, my placement hospital’s cancer care department not only provided services to local Zambians, but also neighbouring countries like Malawi.

I was based in the maternity department and in A&E. In the maternity department, I assisted with obstetric examinations during antenatal clinics, cannulated in emergency situations, and, under supervision, helped in drawing up medications and administering injections. I was familiar with these procedures and had practiced them in the UK, so it was great to experience these in a different setting. Spending time in the emergency department made me aware of common cases that presented locally. I learned how local staff managed them, especially hypoglycaemia and how to immobilise fractures.

Local staff were resourceful in terms of immobilising fractures using just a piece of carton and bandage. One of the most memorable cases I saw was a case of hypoglycaemia. Initially, I thought it was a case of stroke given the age of the patient — she was in her 80’s. The patient presented mainly with slurred speech and weakness. After testing her blood sugar, it was revealed she was hypoglycaemic and was given 50ml of 50% IV glucose.

This is no longer the practice in the UK. Instead, lower concentrations are more commonly used. The doctor explained to me that the only concentrations locally available in this emergency department were 10% and 50%. Since 10% was too weak, 50% was the only concentration that could be used for hypoglycaemia. In addition, the doctor cannulated the patient’s right internal jugular vein (IJV) as he was unable to cannulate the patient in her arm. I was very surprised by this practice as the internal jugular vein is only used when inserting a central line, which is done under sterile conditions.

I learned that cannulating the IJV was common practice in the emergency department because they had no ultrasound scan available to help locate veins in the arm. Another striking difference between the hospital in Lusaka and hospitals in the UK was around the availability and use of guidelines designed to manage common conditions such as acute asthma and eclampsia.

These guidelines, common in UK hospitals, are evidence-based recommendations that advise suitable management. In Lusaka, I observed there were a few guidelines posted on the walls and treatment was made based on what was available. For example, due to the limited supply of medications like magnesium sulphate, it was only provided to the departments that needed them most. In this case, the maternity department was given sufficient supplies due to the common scenario of eclampsia. But this meant there was less available in the emergency department for cases like life-threatening asthma.

The world is large and not many people get the opportunity to see the other side. Using an elective placement period to experience a different culture, language and lifestyle is certainly a rewarding experience. Aside from the different clinical experience I gained from my overseas placement, it also gave me the privilege of exploring places that I may never have otherwise have had the chance to visit.

Work the World specialise in creating overseas medical electives in Asia, Africa and Latin America. Their destinations provide eye-opening insight into the challenges associated with delivering healthcare in the developing world.