A new member of the Smith Recycling Milton Keynes Lightning ice hockey team will be starting an MBA at The University of Buckingham in September. 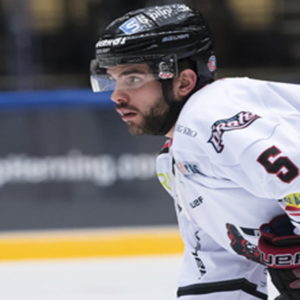 Clay was a key member of the defence whilst playing for Harvard University during his neurobiology studies. Clay, 24, from Nebraska, has transferred after a season where he helped Danish side Aalborg Pirates to victory in the playoffs and second spot in the league.

Over four seasons, he competed in 126 fixtures for the team – a member of the side that was double NCAA Champions.  During his final season with the Crimsons in 2016-17, the team finished the campaign as champions of the Eastern Conference. After signing on for the Pirates last spring, he was praised by Aalborg’s Head Coach for being able to shut down an opposing player but also has a strong offensive mindset.

Clay said: “I am very excited to further my education at The University of Buckingham this year while also playing hockey for the Milton Keynes Lightning. It is a one of a kind experience that not many get to pursue and I look forward to taking full advantage of it.”

Lightning’s Head Coach Doug McKay said the Lightning defence will benefit from having Anderson in it.  “I had very good reports about Clay’s abilities – he reads the game really well and I know he will be strong for us.  He is ambitious and hard-working, and I know he will be a good fit for this team in a very competitive Elite League.”

Clay Anderson’s warm-up, home and away jerseys are now available on the club’s Own and Loan Scheme – this scheme sees your name on the back of his jersey for the season.  The match-worn jersey is then presented to you by the player at the end of the 2018-19 season.